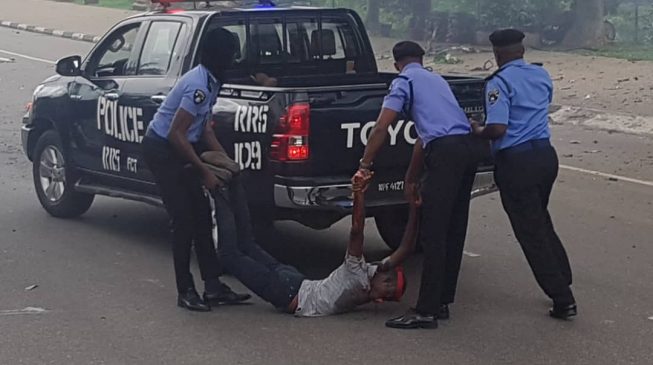 Men of the Nigeria police force evacuated corpses of protesters who were shot dead in Abuja on Monday.
According to TheCable, at least six corpses that were evacuated around federal secretariat, Abuja. They were picked off the street and dumped into a Toyota Hilux van.


ADVERTISEMENT
Members of the Islamic Movement in Nigeria (IMN) had taken to the streets of Abuja to demand the release of Ibrahim Zakzaky, their leader, who has been in detention since 2015.
The protest, which began from NITEL junction at Wuse zone 2, was disrupted by armed policemen who cordoned off the road leading to the national assembly and three arms zone.
Bullets were fired at the protesters as they advanced towards the Eagle Square. The police chased the protesters all over the streets shooting sporadically.
The situation sparked tension as workers fled while motorists abandoned their vehicles on the road.
Frank Mba, force spokesman, later issued a statement, asking residents of Abuja to be calm.
“There is a violent protest currently ongoing by members of the El-Zakzakky Group in some parts of the FCT – particularly the Central Business District and the Three Arms Zone. The Police are taking adequate measures to bring the situation under control,” he said.

“Citizens are advised to remain calm and avoid the affected areas in the interim. The Police will keep the public abreast with further development.”