Pompeo: China's Mistreatment of Muslim Minority Is ‘Stain of the Century’ 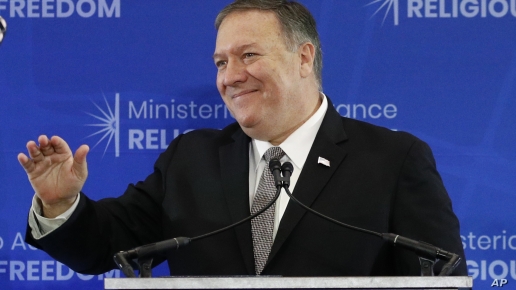 U.S. Secretary of State Mike Pompeo said Thursday that China's mistreatment of its Uighur Muslim minority had created one of the most significant human rights crises in contemporary world history.

Speaking at a conference on religious freedom in Washington, VOA reports that Pompeo said, "China is home to one of the worst human rights crises of our time" and that "it is truly the stain of the century."

The nation's top diplomat also accused Chinese government officials of intimidating countries to keep them from attending the conference and said the U.S. had "taken note" of the countries that succumbed to China. While not naming them, Pompeo urged the countries to "find the courage" to stand up to China.

Pompeo said earlier this week that representatives of more than 100 countries would attend the three-day conference that ends Thursday, but a State Department spokesman could not confirm the number.

"We know the Chinese government called countries specifically to discourage participation," the spokesman said, but "we cannot prove the exact number they successfully impacted."

The Chinese government has dismissed accusations it violated rights to religious freedom. Foreign Ministry spokesman Lu Kang said at a Beijing news briefing Thursday that "this situation of so-called religious persecution does not exist."

Lu also said China "demand[s] that the United States correctly view China's religious policies and the status of religious freedom in China, and stop using the issue of religion to interfere in other countries' affairs."

The U.S. has been considering sanctions against Chinese officials over their policies in Xinjiang but has yet to impose them amid Chinese threats of retaliation.

U.S.-China relations are already tense because of a trade war between the world powers.
Pence offers solidarity

"Whatever comes of our negotiations with Beijing, you can be assured that the American people will stand in solidarity with people of all faiths in the People's Republic of China," he said.
Pence, offering rare criticism of U.S. ally Saudi Arabia, also called on the kingdom to release jailed blogger Raif Badawi, who was sentenced to 10 years in prison for insulting Islam.

Pence also demanded the release of detained religious dissidents in Eritrea, Mauritania and Pakistan and vowed the U.S. would press for religious freedom in North Korea amid efforts to denuclearize the country.