PREVIEW: From ‘best loser’ to host killer — will South Africa be too super for Eagles? 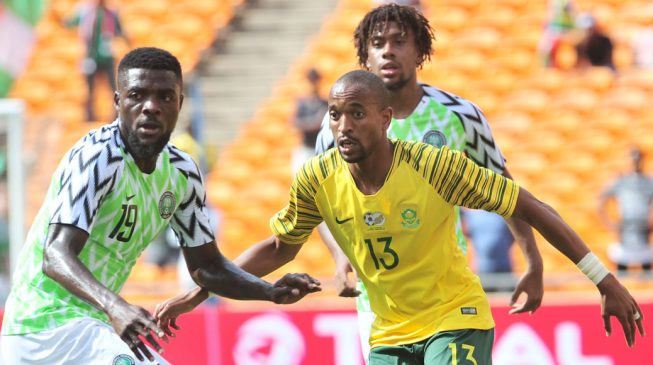 Nigeria aims to book a place in the 2019 Africa Cup of Nations semi-finals when they come up against South Africa on Wednesday night.

The Super Eagles prevailed 3-2 over Cameroon in the second round. However, the Eagles were second best, for most of that game, and will need to improve to book a semi-final spot.
South Africa may have picked their spot in the round of 16 as one of the four best third-placed teams or as its called in Nigerian parlance, “best losers” — but they have shown great determination to make it this far after coming through a gruelling 1-0 victory against hosts Egypt.

Now we can call them “host killers”, who may have shattered Mo Salah’s dreams of lifting the trophy on home soil, and perhaps having a valid contention for the world’s best player award.
It is likely that Eagles head coach Gernot Rohr will stick with his 4-2-3-1 formation. The use of both Ahmed Musa and Samuel Chukwueze at the wings will allow the gaffer to easily change his formation from 4-2-3-1 to 4-3-3 in an instant. This may be crucial should Nigeria go behind in the game.
Possible Nigeria line-up: Akpeyi, Awaziem, Aina, Omeruo, Ekong, Ndidi, Etebo, Iwobi, Ighalo, Musa, Chukwueze
South Africa coach Stuart Baxter has no injury worries ahead of the game with fit players to choose.
Match-winner against Egypt, Thembinkosi Lorch, will keep his place on the left side of South Africa’s front three, alongside target man Lebo Mothiba and star player Percy Tau.
In the event that Lorch is used as a substitute, as he was at the beginning of the tournament, Baxter might go for the security of an extra midfielder in the shape of Themba Zwane.
Baxter’s tried and tested midfield combination of Bongani Zungu, Dean Furman and Kamohelo Mokotjo will provide a solid base that attempts to outnumber Nigeria’s duo Oghenekaro Etebo and Wilfred Ndidi.

Bidvest Wits will be strongly represented in Bafana’s back four with regular central duo Thulani “Tyson” Hlatshwayo and Buhle Mkhawanazi continuing a club partnership for their country.
Wits left back Sifiso Hlanti acquitted himself excellently against Mo Salah in South Africa’s famous win over Egypt, and Baxter will want more of the same from him here when he squares up against Levante winger Moses Simon
Possible South Africa line-up: Williams, Mkhize, Hlatshwayo, Mkhwanazi, Hlanti, Zungu, Furman, Mokotjo, Tau, Mothiba, Lorch
Previous meetings:
In terms of head to head, the two nations have played each other on 13 occasions. Eagles have the edge with six wins, five draws and two losses.

Odion Ighalo Vs Ronwen Williams
Goalkeeper Ronwen Williams has been their star performer so far in the tournament with the South Africa stopper making a number of spectacular saves, and it will be up to Odion Ighalo to find a way past him if Nigeria are to be triumphant.
The Shanghai Shenhua striker has three goals in four matches so far, and will look to add to that tally on Wednesday night to beat Liverpool’s Sadio Mane who is tied with Ighalo on the top-scorer table.
Chidozie Awaziem Vs Percy Tau
Porto defender Chidozie Awaziem is the weakest link in the Eagles back line. He loves to get forward, and if Awaziem does not track back into his defensive position it may leave the Eagles defence exposed. Percy Tau is the “live wire” of Bafana Bafana with his trickery expected to trouble Awaziem. It will be an interesting battle.
Kenneth Omeruo Vs Lebo Mothiba
Lebo Mothiba will be a handful for the Eagles defence. Usually left up front on his own, Mothiba will look to run at the defence with pace, and it will be up to William Troost-Ekong and Kenneth Omeruo to stop him.
Conclusion:
Nigeria could not have asked for an easier quarter-final draw, but underestimating a South Africa side that beat Egypt may prove fatal. If Alex Iwobi and Ighalo are on form, Nigeria should have too much quality for Bafana Bafana.

This preview by Remi Sulola was first published on TheCable.