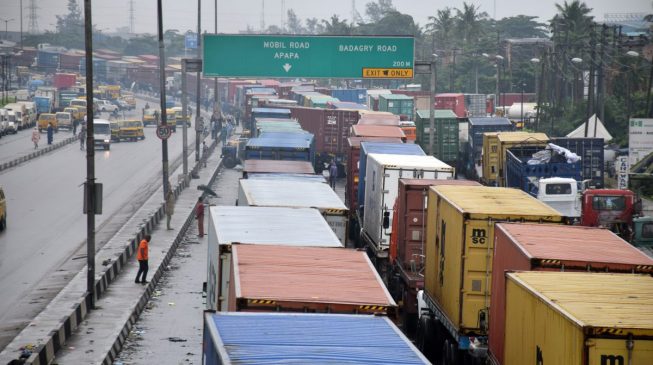 Members of the private sector under the aegis of the Nigeria Employers’ Consultative Association (NECA) says N6 trillion revenue has been lost to the Apapa gridlock.
Speaking at its recently held 62nd annual general meeting, TheCable reports that Mauricio Alarcon, NECA’s second vice president, said there is an urgent need for policy reform so that businesses can operate optimally.

Alarcon said the operational hiccups still exists at the port despite a presidential executive order to promote the efficiency of operations.
“Survey by the OPS shows that Nigeria lost about N3.06 trillion on non-oil export and about N2.5 trillion earnings annually across the different sectors due to the Apapa gridlock,” he said.
“There is the need to fast-track infrastructural development at the Lagos port, diversification programme, market-driven foreign exchange management, sustain and a significant reduction in the cost of governance.
“The government should also fast-track the passage of Petroleum Industry Governance Bill, market-driven electricity supply and billing system.”
For the economy to recover, Alarcon said the government must urgently tackle the insecurity that has already increased unemployment and poverty in the country.
“Unemployment surged from 9% in 2015 to 23.1% in third quarter of 2018, while inflation remains high in spite of tight monetary policy conditions,” he said.
“There is also a spread of poverty. The economy needs to recover.”

He also called for friendly regulatory regime businesses rather than crippling them and enforcement of harmonised taxes and levies by the Joint Tax Board.