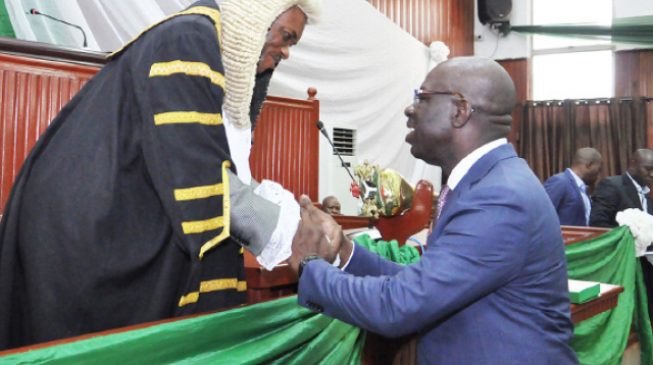 Lawmakers loyal to Godwin Obaseki, governor of Edo state, have accused Adams Oshiomhole, national chairman of the ruling All Progressives Congress (APC), of being behind the plot to seal up the assembly.
The house of representatives had asked the inspector-general of police to seal up the Edo parliament, pending the time the crisis among the state lawmakers is resolved.
Disagreement between Obaseki and Oshiomhole had split the state legislators into two factions.
ADVERTISEMENT
On June 17, nine lawmakers loyal to Obseki elected principal officers and took the oath of office secretly. 15 loyalists of Oshiomhole had described the action of their colleagues as unacceptable, vowing to do all within their power to revoke it.
The lower legislative chamber of the national assembly had raised a 13-man panel to look into the crisis.
Culled from TheCable, on Wednesday, the panel submitted its report. It recommended that a fresh inauguration should be conducted and that the Department of State Services (DSS) and the police should ensure peace.
Reacting in a statement, Frank Okiye, who was elected speaker, accused the committee of acting in favour of Oshiomhole.
He added that security forces could not seal up the assembly because of a court order refraining the police from interfering in the affairs of the lawmakers.
“It has come to our knowledge that the Ad-hoc Committee of the House of Representatives investigating issues surrounding the inauguration of the Edo State House of Assembly has recommended that the Inspector General of Police (IGP) and Department of State Services (DSS) should seal up the Assembly,” the statement read.
“Considering what we came to know in the course of this process, the recommendation of the Ad-Hoc committee does not come to us as a surprise.
“For example, the chattered plane marked 5N FCT, which brought the committee members to Benin City, was paid for by the National Chairman of All Progressives Congress (APC), Comrade Adams Oshiomhole, who is a major party in the disagreement.
“Also, the younger brother to the National Chairman, Seid Oshiomhole, in a recent leaked audio conversation, revealed the underhand dealings in Abuja regarding the matter. He stated that Oshiomhole and his proxies have been having meetings with the committee members and other actors in the issue in Abuja and dolling out money to ensure the issue goes in their favour.
“With all these, it was clear that the ad-hoc committee was up to no good. Their report was always going to be biased.
“The National Assembly must take note that they are expected to act as agents of peace and not merchants of crisis. Edo State has always been peaceful and any attempt for them to carry out this order will certainly disrupt the peace that is currently being enjoyed in the state.”

Simon Egbebulem, spokesman of Oshiomhole, dismissed Okiye’s comment, saying the federal lawmakers were doing their job.
“You and I know that the house of reps is an independent institution. What has the national chairman got to do with their job? They are doing a job as their oversight function, so what has how they went to Benin to do their work has to do with the national chairman? What they are saying is nonsensical,” he told TheCable.