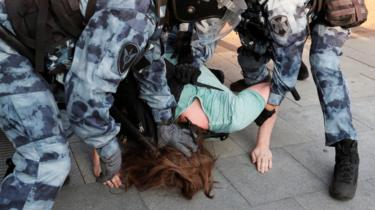 Police in Moscow have detained more than 1,000 people at a rally, in one of the biggest crackdowns in years.
BBC reports that demonstrators were dragged away from the city hall as security forces used batons against the crowd.
ADVERTISEMENT
People were protesting against the exclusion of opposition candidates from local polls. The opposition say they were barred for political reasons.
Some of the candidates banned from standing in the 8 September election had been detained earlier.
Officials disqualified about 30 people, saying they had failed to collect enough valid signatures to stand.
At least 1,074 arrests were made at the banned rally, officials say, while monitors reported 1,127 detentions.
Moscow's Mayor, Sergei Sobyanin, has called the demonstration a "security threat", and promised to maintain public order.
Anger is widespread among opposition supporters at the way the city is run and the ruling United Russia party.
Opposition leader Alexei Navalny, a fierce critic of President Vladimir Putin, was jailed for 30 days on Wednesday after calling for Saturday's unapproved demonstration.
Mr Putin was on a trip to the Baltic Sea on Saturday for a dive in a submersible. "There are a lot of problems on Earth, so to diminish their amount one has to go up and deep down," he remarked.

What happened this Saturday?

Last Saturday, more than 20,000 Russians took to the streets, demanding fair elections, and dozens were arrested.
It is unclear how many people turned up for the new unauthorised rally on 27 July but the numbers seem to have been sharply down.
According to police, about 3,500 people gathered, including about 700 journalists.
Police in riot gear pushed back the crowd from barriers surrounding the mayor's office in central Moscow, hauling off detainees to police stations.
A number of protesters could be seen bleeding while at least two members of the security forces reportedly received eye injuries from pepper spray.

A powerful message to the regions?

No -one was under any illusion that the large gathering would impress authorities into letting people express themselves peacefully. This rally went very much the same way others have done - arbitrary detentions, standoffs, crowds breaking off into the side streets.
The question is whether the anger over not being able to nominate a candidate - even for lower-level, city elections - would galvanise Muscovites into bigger, sustained expressions of dissent. After all, there are lots of residents not happy with the way Moscow government and Mayor Sobyanin run the city, or respond to popular concerns.
Certainly, the would-be candidates, most of them seasoned anti-Putin activists, are hoping that the resentment will linger. That is exactly why policy handlers in the Kremlin are desperate to put a lid on it.
With both Mr Putin's ratings falling and the United Russia party deeply unpopular, chanting crowds in the capital may send a very powerful message to other regions preparing to hold their elections.

How did we get here?

Local elections usually attract little attention in Russia.
The Moscow authority does not control the city's budget or choose key official appointments, and previous votes have passed without major protests or press interest.
But this year some Muscovites are infuriated at what they see as brazen attempts to disqualify independent politicians from running.
Candidates were asked to collect 5,000 signatures to stand. This limit was made even harder to match because a signature "means volunteering one's personal information for the government's database of opposition supporters", democracy activist Vladimir Kara-Murza wrote in the Washington Post.
Many candidates managed to meet the threshold but the electoral commission ruled some signatures ineligible, saying they were unclear or the addresses provided were incomplete, and barred the candidates from taking part.
Opposition groups say the authorities had no reason to rule them ineligible - claims that electoral officials denied. "We have no reason to doubt our experts," commission member Dmitry Reut said, according to media reports.
Mr Navalny, who addressed the crowds last Saturday, is not one of the candidates, although he stood in Moscow's mayoral elections in 2013 and won 27% of the vote in a result he disputed.
Ella Pamfilova, the head of the electoral commission, said the protests would not change their decisions. "It doesn't matter, not even a bit of it," she said, dismissing the demonstrations as "political".
The authorities banned this Saturday's rally on the grounds that there were threats of violence against the commission.
Police then raided the homes of several opposition politicians, and called them in more for questioning.

What's been the reaction?

Election candidate and opposition leader Dmitry Gudkov tweeted that the council had "died under Putin".
"The last illusion that we are able to participate legally in politics has disappeared."
Some newspapers also denounced the raids. Novaya Gazeta ran the headline Moscow City Terror on Friday, while Vedomosti said authorities were using force to suppress the protest "having failed to counter it with political means".
Skip Twitter post by @BBCSteveR
Report
End of Twitter post by @BBCSteveR
Russian government paper Rossiyskaya Gazeta, however, accused the opposition of "blackmail" and "an unacceptable attitude to the statutes of law".
Political analyst Abbas Gallyamov told BBC Russian that the official response was designed to dissuade people from taking part. Any mass action would suggest the opposition had taken the initiative from the government.
Some believe the demonstrations could actually benefit the local authorities by reducing turnout.
ADVERTISEMENT
"Young opposition supporters will not come to the polls, while the older generation whom the authorities are counting on vote out of habit," Denis Volkov, an expert at independent think tank Levada Center, told the BBC. "The authorities will orient themselves towards them."