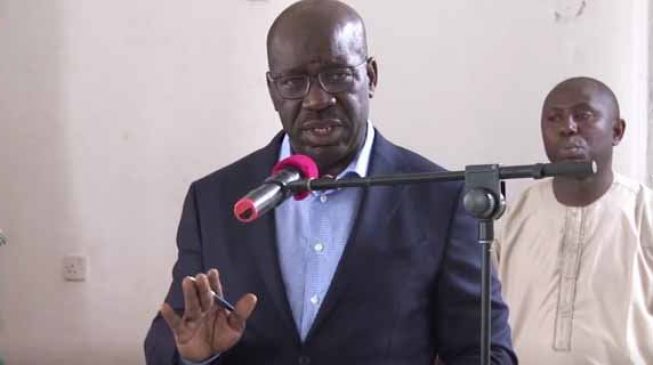 The senate has given Godwin Obaseki, governor of Edo, a week ultimatum to issue a fresh proclamation for the inauguration of the state house of assembly, TheCable reports.
A misunderstanding between  Adams Oshiomhole, national chairman of the All Progressives Congress (APC), and Obaseki had led to the factionalisation of the state assembly.
ADVERTISEMENT
Nine lawmakers loyal to Obaseki were secretly inaugurated on June 17, leaving their colleagues in the camp of Oshiomhole stranded.
The governor has ignored several calls to issue a fresh proclamation for the inauguration of the assembly.
At plenary on Tuesday, the upper legislative chamber threatened to take over Edo assembly if the governor failed to issue another proclamation.
The red chamber said section 11 (4) of the constitution empowers it to do so.
The resolutions of the senate were sequel to a report presented by Sabi Abdullahi, deputy senate whip.
Abdullahi chaired an ad hoc committee set up by the senate to probe the crisis rocking the Edo assembly.
The house of representatives had earlier asked Mohammed Adamu, inspector-general of police, to seal off the Edo assembly over the crisis.
The federal lawmakers had also threatened to take over the assembly.
ADVERTISEMENT
Earlier in the month when he received some of his supporters in Benin, the state capital, Obaseki had dared those whom he described as “Abuja politicians” to take over the state if they could.