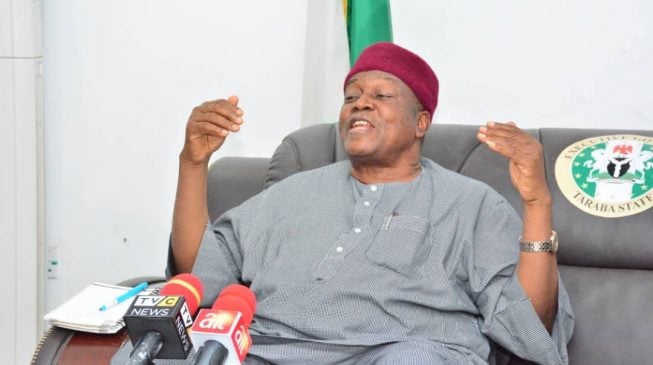 Darius Ishaku, governor of Taraba state, has described the Ruga initiative as a form of colonialism, saying it should not only be suspended but cancelled.
The federal government had proposed the idea as a means of addressing the incessant clashes between cattle rearers and farmers but it was suspended following public outcry against it.
Speaking with journalists at the government house in Jalingo, on Tuesday, TheCable reports that Ishaku said the policy would not have worked in Taraba because the state already has a law prohibiting open grazing.

He said he submitted a loan request to the Central Bank of Nigeria (CBN) to facilitate ranching in the state but the loan was not approved.
“Ruga is colonialism; it is not about cattle; it is not even about grasses. It should not only be suspended, but it should also be cancelled completely,” he said.
“The whole Ruga scheme should be canceled. You can’t do a Ruga in the entire country. I don’t accept it. It is not workable, and it will not work in Taraba state.
“Already, I have in place the Anti-Open Grazing Law in Taraba state that prohibits open grazing but encourages ranching. And we are making a lot of progress on ranching.
“I submitted a request to the Central Bank of Nigeria (CBN) for us (Taraba) to be given a loan for us to do the ranching but the CBN has refused to approve it, for reasons I don’t know.
Advertisement

“Otherwise, I would have showcased what ranching is in Taraba state. It is the best form of practice in modern days, if indeed you are talking about cattle, grasses and grazing.
“But I don’t think they (federal government) are talking about cattle; I don’t agree that they are talking about grasses. They are talking of something else, colonisation.”
He described the democracy being practised by the All Progressives Congress (APC) as “embarrassing and insulting” while reacting to the siege to his residence in Abuja by the police.
The police had allegedly raided the Abuja residence of the governor in June, saying they had a warrant from the special presidential investigation panel (SPIP) to search the house.
He expressed shock that the APC did not condemn the action.
“I feel very bad that the democratic government of the APC is not living according to the tenets of the constitution. It is disgraceful, embarrassing and insulting,” he said.
“I’m shocked that only my party, the Peoples Democratic Party (PDP) condemned the police’s siege on my house. APC didn’t talk about it. Don’t they have governors? Can somebody walk into an APC governor’s house and search it?
“They broke the gate, broke all the doors of my house, threw out my children. I used two years to beg them (children) to come back to Nigeria. Now, one of them has gone back, I’m still begging him to come back to Nigeria. This is nonsense.”