THE INSIDER: Pinnick wanted to kick out CAF president — but his plans backfired 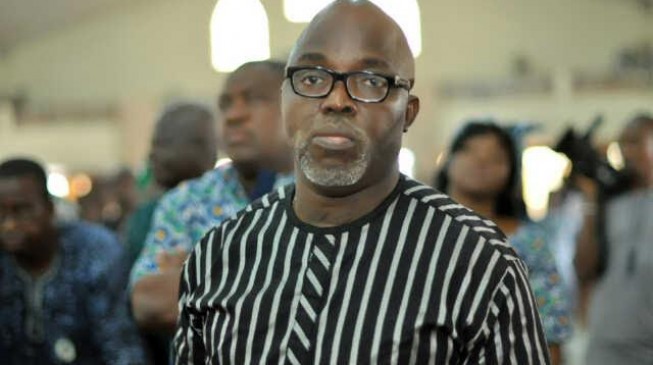 Amaju Pinnick, president of the Nigerian Football Federation (NFF), wanted to kick out Ahmad Ahmad as president of the Confederation of African Football (CAF), so he could take over, insiders have told TheCable.
TheCable was reliably informed that Pinnick was booted out as the next man to the CAF’s president because he does not support Ahmad as is expected of him as a deputy.
Pinnick replaced Kwesi Nyantakyi on July 5, 2018, following a FIFA ban on Ghana’s former FA president.

Ahmad believed Pinnick had set up some journalists of clout to help bring his tenure to an end before his term expires.
Another source familiar with the matter also revealed that Pinnick did not back Ahmad on the decision by FIFA to appoint Fatma Samoura as Africa delegate to help conduct a forensic audit on the running of the continental body.
It was also alleged that the former Delta state commissioner of sports declared war on the Malagasy man after Mouad Hajji, acting general secretary of CAF, responded to Nigeria’s Special Presidential Investigative Panel’s correspondence on the clarification NFF payment of $500,000 to the continent’s body in 2015.
A CAF topshot, who spoke with TheCable, said Pinnick embarked on the mission of getting the CAF’s president out of office to get himself to the seat.
“Pinnick brought this on himself because of his arrogance,” the insider told TheCable.
“He felt he could get Ahmad out of the way for him to be installed as the CAF. His personal ambition blind-sided him, forgetting that he attained the 1st Vice President position on Kwesi’s ban from FIFA.
“He was not elected but selected because the president thought he could be trusted and that he could help in steering African football forward.
“But Ahmad could not continue with such a person as his 1st Vice President.”

PINNICK’S SIDE OF THE STORY

According to a press statement by Ademola Olajire, NFF’s media director, Pinnick’s tenure as the 1st vice president of CAF was not extended at the 32nd Executive Congress held at Marriot Hotel, Cairo on Thursday.
“In line with Article 22(4) of the CAF Statutes, every two years when elections are held at the CAF Congress (as took place today), the CAF Executive Committee on the proposal of the CAF President, elects a 1st, 2nd and 3rd Vice President respectively from among its members,” the statement said.
“Significantly the renewal of Amaju Pinnick’s tenure was not proposed by the CAF President because of fundamental differences on focus and direction.
“Pinnick accepted the decision of the President as it aligned with his own view having considered matters surrounding the administration of African Football which has dovetailed into the Nigerian Football space.
“He will, however, remain a bonafide member of the CAF Executive Committee to continue with his mandate as such.”
Pinnick was quoted to have said his commitment to the game is perpetual.

“It has however been an excellent opportunity to serve as the number two football administrator in the entire African continent and my commitment to the game is perpetual while my support for my colleagues in the Executive Committee remains steadfast,” Pinnick was quoted to have said.
“I congratulate, Omari, Lekja and Danny on the assumption of their new roles as 1st, 2nd and 3rd Vice CAF Presidents respectively.”