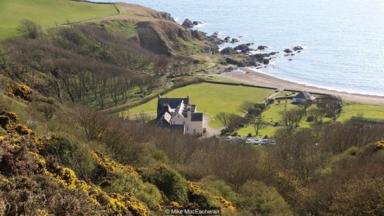 One of the best-kept secrets of World War Two is that D-Day was planned in a remote hunting lodge in south-west Scotland 75 years ago. Or was it?

As a child, he was first hooked on tales of bombers and spitfires while hiking with his father in the foothills of Criffel, an isolated summit that dominates the coast of the Solway Firth. Together, they’d encounter aircraft wreckage – bits of LB-30 Liberators, de Havilland DH.98 Mosquitos and twin-engine Ansons – all gleaming and exposed. Most were caught in downdraughts or suffered mishaps after taking off from one of the many RAF stations nearby. For a little boy, it was an aviation history lesson writ large in the heather.

Unearthing the secret side of World War Two is a rush that Service has been chasing ever since. Still today, he scrutinises station records that detail the comings and goings of military personnel to his home county of Dumfries and Galloway, and knows intimate details about 400-plus air crashes involving the training of pilots, gunners and navigators in the area.

But there is one story – one extraordinary hush-hush secret – that remains an obsession. It involves two of the most important and influential figures of the past century and the day they supposedly held a furtive meeting at Knockinaam Lodge, a gloriously remote hideaway on the Rhins of Galloway peninsula. And according to local rumour from the time and the previous owners of the lodge, it is a cast-iron truth.
The names, which can’t be found on any guestbook, are Winston Leonard Spencer Churchill and Dwight David Eisenhower. And it is said the former British Prime Minister and former US President and wartime Commanding General met in the front room, overlooking Port of Spittal Bay, to plan the Allied invasion of Normandy during World War Two while taking tea. Talk about history: this was the place – the moment, the hour – that D-Day became a reality.

The meeting, history now shows, had a decisive role to play in shaping the course of the deadliest war of all time. For the D-Day invasion was so successful, it drained German resources and ultimately led to the liberation of Western Europe.

Or so the story goes. It was a midweek lunchtime at a shopping centre in Dumfries and I’d come to meet Service hoping to glean some insight into the day that changed the world. I had a personal interest in the story, too. Both my grandfathers fought in World War Two, and my first-ever holiday, aged five and joined by two of my grandparents, was to Portpatrick, a beach village five minutes by car from Knockinaam Lodge.

Outside, the sun shone brightly and the wind blew in from the south. Talk among locals was of Brexit and an upcoming EU summit, but the military historian and I had other business: to time travel to a hazy day sometime in May 1944.
“I’ve read all the history books containing every top-secret story that happened in Dumfries and Galloway during World War Two,” said Service, whose grandfather was a lieutenant colonel during World War One and whose father served in the Royal Navy in World War Two. “And yet there’s no mention of the meeting between Churchill and Eisenhower. That’s what intrigues me. I feel like a Cold War spy trying to figure this out. I can’t let it go.”


His tenacity is such that this year alone he has read 16 books that could have proved relevant in his search for the truth, and he has recently received a copy of a special logbook from ‘Bayonet’, the secret first-class train car used by Eisenhower when he covertly travelled around the UK. From the get-go, I could tell the historian’s preoccupation was relentless: the day before we met, Service had also received official correspondence from the Eisenhower Presidential Library in Abilene, Kansas, to confirm whether Knockinaam Lodge is mentioned in its extensive archive.

“There are clues all over the place,” he mused, rubbing his hands. “Churchill landed by seaplane to Knockinaam and spent two nights – that’s been confirmed by those who were alive at the time. Eisenhower then flew into Turnberry up the coast. So surely it can’t be coincidence. Or can it?”
 

Nowadays, people make pilgrimages to war sites across Europe for all reasons. To the battlefields of Ardennes in Belgium, to the John Frost Bridge in Arnhem in the Netherlands, to Auschwitz-Birkenau in Poland, to the Cabinet War Rooms in London. They flock to Sword, Juno, Gold, Omaha and Utah, the once-fortified beaches in Normandy where the Allied forces successfully landed on 6 June 1944. Dumfries and Galloway is a long way from the battlefields of World War Two, but scholars have been known to make similar pilgrimages to Knockinaam led by rumour alone.

As the afternoon ticked on, Service pointed to other factors in the pre-D-Day timeline that could help confirm the meeting at the secluded lodge. Within only a few miles was RAF West Freugh, an armament training camp that served as a base for the Bombing Trials Unit. There was also a secret military port created for emergency use at nearby Cairnryan. Both would have proved reason enough for a visit.

Records also show that Eisenhower flew into Glasgow Prestwick Airport, two hours to the north, in January 1944 with an unknown purpose, before returning in April to boost soldier morale and to enjoy a fly-fishing holiday in Banchory, Aberdeenshire. It’s also no secret Churchill was friends with the Orr-Ewing family, the former owners of Knockinaam Lodge (indeed, one of Churchill’s family members was married to an Orr-Ewing), and its seclusion made it one of his favourite places to stay. So much so that he is said to have rehearsed speeches for the House of Commons in the bath during stays.

Another marquee reason for the wartime leaders to meet at Knockinaam was nearby Mulberry Harbour, a beach and seabed on the Wigtownshire coast that hid one of D-Day’s other great secrets. For it was here, on the waterfront of the village of Garlieston, that floating temporary harbours – nicknamed ‘Mulberries’ – were built and tested ahead of being towed to France for landing troops, vehicles and supplies during the Normandy assault. Could the men have met in secret while visiting for an inspection?

“The lodge certainly would have been perfectly placed, especially in light of the well-kept secret at Garlieston,” Service told me. “Churchill is also said to have visited Mulberry Harbour while it was being built. Another story? Another secret if you ask me!”

There are clues all over the place


While no definitive paper trail exists, another version of events is that Churchill and Eisenhower met following ‘Rattle’, a secret wartime conference held one year prior to D-Day in Largs, a seaside town a two-hour drive further north. To take the spotlight off London, Lord Louis Mountbatten, chief of combined operations, brought a military circus north, and historical archives show both Churchill and Eisenhower were present.

To muddy the waters further, a second Scottish hotel lays claim to hosting the era-defining meeting. In 1944, it is known that Winston Churchill stayed at Glenapp Castle in nearby Ballantrae, and the hotel’s proprietors believe the landings were discussed here, too. It is as if the more people have talked about it, the more the truth has worn out.
 

To get to Knockinaam Lodge, I drove east through estates populated by deer and pheasants until the map of Scotland stopped abruptly at the Irish Sea and I was left at the doors of a period-accurate hotel.
Today, Knockinaam looks like the set for the perfect historical war thriller, a Bletchley Park-on-Sea with remoteness its key. A rambling country lane leads towards a shingle beach and secluded cove, flanked by a gable-ended stone building from 1869. There’s no other structure in sight.
By the front door, there is a blue plaque dedicated to a former lieutenant commander and war hero who learnt to fish and shoot here, and a further detail that is far more mysterious. A closer inspection reveals a series of discreet stone vignettes, once used to hang camouflage netting to hide the lodge from the sea. It’s hard to believe, but these same calm waters were once patrolled by submarines.
Step inside and all signs of World War Two intrigue disappear: the 10-bed lodge has a glossy Scots veneer and revels in modernity, as well as its history. The Churchill Suite, where the former prime minister once stayed, is given over to mid-century furnishings and details that wouldn’t have looked out of place in 1944.
 

“As time goes on, there are fewer people who remember whether or not the meeting took place,” said David Ibbotson, who has managed the property for 16 years with his partner Sian. “Eddie Orr-Ewing, the son of the former owners, told me they definitely stayed here, but he’s now 88 and his memory isn’t reliable at all. Orr-Ewing’s dad was in the House of Lords as a Liberal politician, so he certainly would’ve known Churchill and invited him to stay.”

While the Ibbotsons have never been sure of the story’s legitimacy – it is, after all, one they inherited from the previous owners – history confirms the hotel’s finest hour might have been its other, lesser-known starring role during wartime. Before turning hotel in 1973, the private house was used as a military hospital to rehabilitate the wounded.

Not all places would welcome such painful memories. But locals here are justifiably proud of their county’s role in the World War Two effort. The association with Churchill and Eisenhower guarantees their forgotten hideaway is talked about as the yearly D-Day anniversary draw near on 6 June. The legend of the secret meeting is deeply ingrained into their psyche. And for them, there is no doubting the secret meeting ever happened at all.

This story by Mike MacEacheran is a BBC Travel series looking into how a destination has made a significant impact on the entire planet and was first published 5 June 2019.