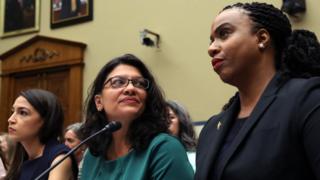 UK Prime Minister Theresa May has criticised US President Donald Trump for calling on several Democratic congresswomen of colour to "go home".
The outgoing PM called Mr Trump's words "completely unacceptable", according to her spokesperson.
According to BBC, Mr Trump said the women "originally came from countries whose governments are a complete and total catastrophe".
ADVERTISEMENT
He was referring to four congresswomen - three who were born in the US and one who came as a child refugee.
His remarks were widely condemned as racist, and as having gone beyond previous statements and actions by the president that drew allegations of racism.
Prospective Democratic presidential candidates denounced Mr Trump's tweets as racist and divisive. Republican Party representatives kept quiet.
Despite the criticism, President Trump launched another Twitter tirade on Monday morning, calling on the women themselves to apologise.
The women - Alexandria Ocasio-Cortez, Rashida Tlaib and Ayanna Pressley, and Ilhan Omar, who came to the US as a refugee aged 12 - all called the president racist and were been backed by members of the Democratic Party.
Ms Ocasio-Cortez was born in the Bronx in New York, approximately 12 miles away from the Queens hospital where Mr Trump was born.
Mrs May resigned as UK prime minister in June after being unable to get a Brexit deal through parliament. Two candidates in the governing Conservative Party are currently vying to replace her.

What did the president say?

In a three-tweet thread on Sunday, Mr Trump accused the congresswomen of "viciously" criticising him and the US.
The president did not explicitly name the women he was talking about, but the context - and references to House Speaker Nancy Pelosi - made a clear link. He said Ms Pelosi would happily organise for them to leave the country.
A week ago, Ms Pelosi clashed with the four women - sometimes nicknamed "the squad" - but she has since come to their defence following his tweets.
The president wrote: "So interesting to see 'progressive' Democrat congresswomen, who originally came from countries whose governments are a complete and total catastrophe, the worst, most corrupt and inept anywhere in the world (if they even have a functioning government at all), now loudly and viciously telling the people of the United States, the greatest and most powerful nation on earth, how our government is to be run.

"Why don't they go back and help fix the totally broken and crime-infested places from which they came. Then come back and show us how it is done.
"These places need your help badly, you can't leave fast enough. I'm sure that Nancy Pelosi would be very happy to quickly work out free travel arrangements!"
There have been internal feuds among Democrats over a border funding package, with Ms Pelosi arguing in favour of the package, and the four women - all newcomers to Congress with a progressive agenda - voting against.
Last week, Ms Ocasio-Cortez accused Ms Pelosi of singling out women of colour for criticism.
On Monday, Mr Trump lashed out again in two tweets.
"When will the Radical Left Congresswomen apologise to our country, the people of Israel and even to the office of the President, for the foul language they have used, and the terrible things they have said. So many people are angry at them and their horrible and disgusting actions," he said.
"If Democrats want to unite around the foul language and racist hatred spewed from the mouths and actions of these very unpopular and unrepresentative Congresswomen, it will be interesting to see how it plays out. I can tell you that they have made Israel feel abandoned by the US."
Ms Tlaib and Ms Omar have recently been embroiled in controversies relating to Israel.

What has the response been?

Ms Pelosi quoted Mr Trump's tweets and described them as "xenophobic".
"When @realDonaldTrump tells four American congresswomen to go back to their countries, he reaffirms his plan to 'Make America Great Again' has always been about making America white again. Our diversity is our strength and our unity is our power," she wrote.
Skip Twitter post by @SpeakerPelosi

I reject @realDonaldTrump’s xenophobic comments meant to divide our nation. Rather than attack Members of Congress, he should work with us for humane immigration policy that reflects American values. Stop the raids - #FamiliesBelongTogether!
— Nancy Pelosi (@SpeakerPelosi) July 14, 2019

Report
End of Twitter post by @SpeakerPelosi
Ms Tlaib, congresswoman for Michigan's 13th district, tweeted calling for Mr Trump's impeachment.
"Want a response to a lawless and complete failure of a president? He is the crisis. His dangerous ideology is the crisis. He needs to be impeached," she wrote.
Ms Ocasio-Cortez tweeted at Mr Trump: "On top of not accepting an America that elected us, you cannot accept that we don't fear you either."
Skip Twitter post by @AOC

You are angry because you can’t conceive of an America that includes us. You rely on a frightened America for your plunder.

You won’t accept a nation that sees healthcare as a right or education as a #1 priority, especially where we’re the ones fighting for it.

Report
End of Twitter post by @AOC
Ms Omar told the president that he was "stoking white nationalism because you are angry that people like us are serving in Congress and fighting against your hate-filled agenda". And Ms Pressley shared a screenshot of Mr Trump's tweet, adding: "THIS is what racism looks like.WE are what democracy looks like."
Candidates for the Democrat presidential nomination, including Elizabeth Warren, Beto O'Rourke and Bernie Sanders, condemned Mr Trump's remarks as racist.
Skip Twitter post by @BernieSanders

When I call the president a racist, this is what I'm talking about

We must stand together for justice and dignity towards all. https://t.co/lweeJk7NoF
— Bernie Sanders (@BernieSanders) July 14, 2019

Report
End of Twitter post by @BernieSanders
Representative Justin Amash - who quit the Republican Party earlier this month to become an independent, in protest against the president - called the comments racist and disgusting.
Democratic representative Don Beyer - who was born in Italy and is white - pointed out that he had never been targeted with similar criticism from the president.
Skip Twitter post by @RepDonBeyer

Only one of the Members of Congress pictured below was born outside the United States.

It’s me, also the only one who was not the subject of a racist tweet by the President today. All of us — including those like @Ilhanand me born elsewhere — are proud Americans. pic.twitter.com/EOUCCj7Ldx
— Rep. Don Beyer (@RepDonBeyer) July 14, 2019

Report
End of Twitter post by @RepDonBeyer
Mr Trump has tweeted since, further criticising "people who speak so badly of our country".

Mr Trump did not specifically mention a link to recent news events, but immigration at the southern border was a dominant topic in US news at the weekend. On Friday, Ms Ocasio-Cortez, Ms Tlaib and Ms Pressley testified to a House committee about conditions in a migrant detention centre they had visited. They expressed horror about alleged mistreatment happening "under American flags".
Ms Ocasio-Cortez said migrants told her they had drunk water from toilets because sinks were broken.
Vice-President Mike Pence also toured a facility on Friday. He said everyone was being "well cared for".
The president tweeted that children's detention centres had had "great reviews" and the adult male areas were "loaded up with a big percentage of criminals".

The president on race

Mr Trump has been accused of racism many times in connection with different incidents.
For years, he made false claims that former President Barack Obama was not born in the US- propagating the racist "birther" conspiracy. He has also made numerous slurs against Central American migrants, calling them criminals and rapists. In 2018, he faced criticism from both Democrats and Republicans after reports said that during a meeting at the White House he called African nations "shitholes".
When white supremacists marched in Charlottesville, Virginia, resulting in the death of 32-year-old counter protester Heather Heyer, the president said there were "good people on both sides".
Mr Trump and his father Fred Trump were sued by the Department of Justice in 1973 for discrimination against African Americans in their renting practices. They settled the case without admitting guilt in 1975 but were accused again by the justice department in 1978 of an "underlying pattern of discrimination" against black tenants.
In 2018, President Trump told a reporter: "I am not a racist. I'm the least racist person you have ever interviewed".