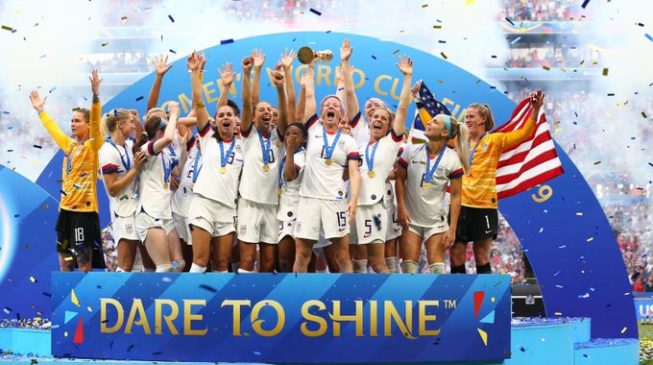 United States of America women national team defeated Netherlands 2-0 to win their fourth FIFA Women’s World Cup trophy at the State de Lyon, France.
TheCable reports that the US team, which defeated Japan 1-0 in Canada four years ago, claimed the 2019 edition on Sunday in a back-to-back win.
Megan Rapinoe scored her sixth goal of the tournament — sending van Veenendaal the wrong way — to give the USA the lead in the 61st minute.
Rapinoe’s goal is the first penalty scored in the Women’s World Cup final match.

It was the second penalty awarded in a final — since the first was saved by Germany goalkeeping legend Nadine Angerer, after a shot by Brazil star Marta in 2007.
At the final whistle, the US women team sprinted around the field in celebration while the Netherlands players collapsed to the ground.
An emotional Rapinoe said she feels like a proud mother when she sees the impact being made by some of USA’s young players at France 2019.
“I feel like a mother watching my kids to be successful,” she said.
The Jill Ellis side scored 26 goals at France 2019, to set a new record for a single edition of the Women’s World Cup.
This will be the second time the Netherlands team has appeared in the Women’s World Cup. In 2015, they were knocked out in the round of 16 by Japan — which was, in turn, beaten by the U.S. in the 2015 final.
2019 FIFA World Cup awards: