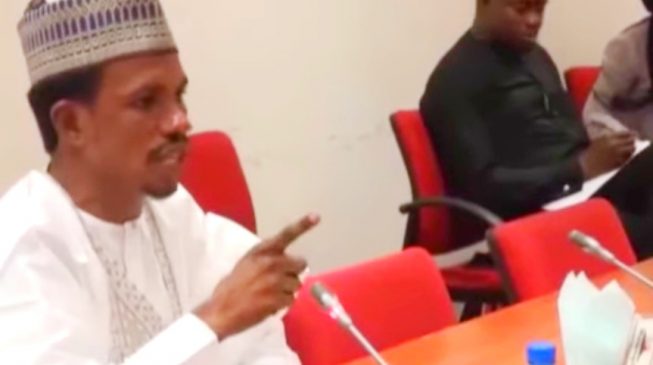 Elisha Abbo, senator representing Adamawa north, did not take it calmly on the first hearing with the senate ad hoc committee set up to probe him.
Abbo, who is currently facing a public backlash after a video of him assaulting a woman in a sex toy shop went viral, had apologised but his action at the senate committee hearing on Thursday sparked a heated argument.
TheCable reports that Abbo said he had refused to allow journalists interview him over the matter, and he would not understand why he came in for the hearing to be “ambushed” by journalists.

Insisting that the hearing be done privately Abbo said “I am not addressing camera, I am not addressing the press.”
Before allowed to explain this, Remi Tinubu, senator representing Lagos central who is a member of the committee, told Abbo he was new in the senate and cannot tell the committee how to handle the hearing.
“You are just joining us. We have a procedure and we are also under law. What we are doing, we are doing as a legislature. You don’t come in here when we invite you, despite you are our colleague, you are on the other side now,” she said.
“Everybody requires a fair hearing, what is going on with you affects us as a body. You don’t come in here and dictate to us the procedure we are supposed to adopt. You don’t dictate to us, because you undermine us by even trying to do that. You haven’t even listen to us, even if we are going beyond what you expect, you can stop us.