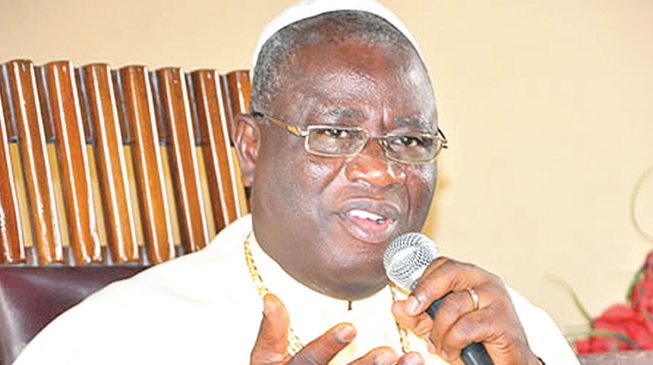 Samuel Uche, head of Methodist Church Nigeria, has dismissed the allegation Busola Dakolo levelled against Biodun Fatoyinbo, founder of the Commonwealth of Zion Assembly (COZA).
In June, Busola, celebrity photographer and wife of Timi Dakolo, had alleged that she was raped by Fatoyinbo at the age of 16.
Although Fatoyinbo denied the allegation, there was pressure on him to step down. Following protests and social media outcry, the pastor eventually stepped aside for the issue to be investigated.

In an interview with V.T.N Business Delight on Silverbird Television, TheCable reports that Uche said the allegation is an attempt to blackmail and tarnish the preacher’s image.
“Some allegations are foolish. From my way of analysing things, there is no truth in such attempt,” he said.
“You say somebody raped you and after 16 years, you are out to report. What is wrong? Maybe you demanded money or you wanted some payment and the person is not able to give you, and then you chose to blackmail the person. Why do you punish somebody for a sin committed 16 years ago?

“Our lord Jesus Christ says any sinner that believes is forgiven. He called us and he said repent for the kingdom of God is at hand. How do you go and tarnish the image of a man who committed something some years ago. Is it relevant?”

-Video: "Some allegations are foolish,Why punish someone for sin he committed 16 years ago?". - Prelate of Methodist church Nigeria, Eminence Samuel Uche,reacts to recent r*pe allegations against COZA Pastor Biodun Fatoyinbo