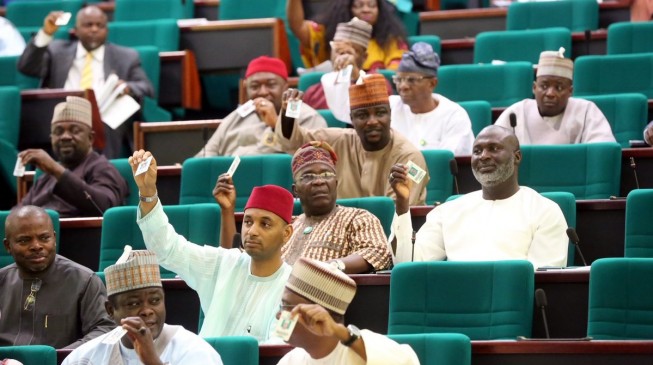 The house of representatives plenary on Tuesday turned chaotic during a debate by members to decide the fate of Ibrahim El-Zakzaky, leader of the Islamic Movement in Nigeria (IMN).
TheCable reports that Ahmed Shamdudeen from Kano state had introduced a motion on the need to stem the rising incidence of attacks and insecurity occasioned by the violent protests in parts of the country, particularly in Abuja.
ADVERTISEMENT
But Herman Hembe from Benue state soughtan amendment to the motion. He asked that it also reflect a call for the release of the IMN leader, who has been in detention since 2015, despite court orders that he should be released.
Hembe said El-Zakzaky’s detention is unconstitutional and should be condemned.
Linda Ikpeazu from Anambra state made another amendment calling on the Kaduna state government which is currently prosecuting the Islamic leader to release him.
Following debate by some members, the prayers for amendment was put to voice vote after which majority voted against it but those in support of it started protesting immediately.
This prompted Femi Gbajabiamila, the speaker, to call on the members on the various divide to move on either sides to clearly determine those for and against the motion.
He added that the process would be done behind closed-doors after which some lawmakers walked out of the chamber.
ADVERTISEMENT
The development comes a day after a protest by El-Zakzaky’s followers turned violent, leading to the deaths of a journalist with Channels TV, a senior police officer and some IMN members.