We don’t want war in the south-west, says ooni after visiting Buhari 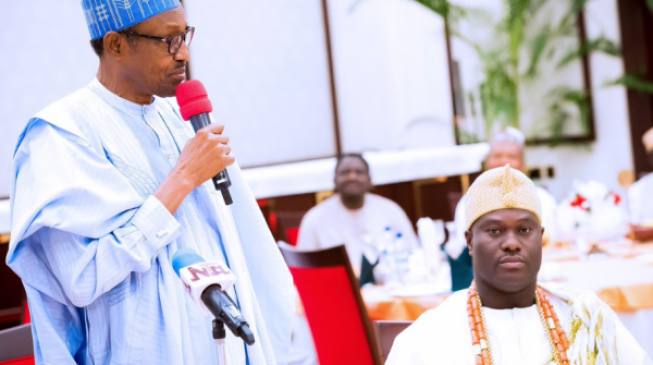 Adeyeye Ogunwusi, ooni of Ife, says the Yoruba people are against violence in the south-west region.
Speaking with reporters after meeting President Muhammadu Buhari at Aso Rock on Thursday, TheCable reports that the monarch said the region is in need of something better for its youth.
Ogunwusi said he was at the villa on behalf of south-west monarchs, adding there is a need for collaboration between the traditional rulers and security agencies in order to tackle the problem of insecurity in the region.
ADVERTISEMENT
He said strange people are occupying the bushes in the region, adding that there is a need to fish them out.
“Before I came here I discussed with the Alafin of Oyo, Oba Lamidi Adeyemi, who has been there for close to 50 years and we cannot tore away such a very massive experience in terms of knowing the structure of Nigeria. And also by virtue of that Alaafin is in constant touch with Awujale and very much we are all on the same page,’’ he said.
“So, I’m here and I had a discussion that is very fruitful with Mr President about what we all know – the security situation in the country. We made him to know that the issue at hand in the south-west is real – the issue of insecurity.
“We live in the remote and rural areas of the south western part of the country, most of those bushes and those forests are being occupied by strange people and we have decided to take it upon ourselves to try as much as possible to work with the government to fish them out.
“Why I’m here again is, everybody is beating the war drum; we don’t want war; who can stand war? We want something better for our youths. We should better use them for something good other than shouting war and anarchy. And to the glory of God we told Mr President that and he is on the same page with us.
“We should make sure that things are right. Mr President has actually given good directives to all the security chiefs, especially the Inspector-General of Police. They will visit all traditional rulers’ palaces that are very sensitive in the southwest with immediate effect – he is going to give that directive.
“We need to work very closely with them and every other security agency in the country. We all must put them to use now; it is very important for us to put them to use and work with the locals.”
The ooni of Ife said Buhari should be given the opportunity to explain his side of the Ruga settlement plan.
“Another thing that he assured me of before leaving – which I will go and give back to much more experienced traditional rulers in the southwest which I have mentioned their names earlier and even our leaders across bound – is that he would say his own side of the story about Ruga (settlement),’’ he said.

“He wants to let the world and Nigerians in particular to know the true side of the story because he is being read out of context. So we should give him that opportunity as the number one citizen of the country and what is important for me is the youthful exuberant nature of our youths in Nigeria; they should not take laws into their hands by going into those places and begin to kill and maim.’’