‘We’ll give you $75K for every goal you score now’ — Dangote, Otedola to rain dollars on Eagles 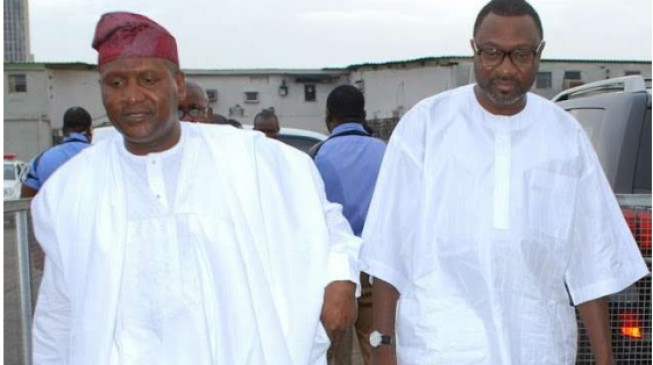 Aliko Dangote and Femi Otedola, Nigerian billionaires, have promised the Super Eagles $75,000 for every goal scored in their remaining games at the ongoing Africa Cup of Nations.
TheCable reports that Dangote has promised $50,000 per goal, while Otedola pledged the sum of $25,000 for each goal scored by the Eagles.
Earlier in the group stage of the 2019 AFCON, Aiteo group, one of the official sponsor of the senior men national team gave the Eagles $75,000 for the three goals scored in their 3-2 victory over Cameroon in the Round of 16.

Hosea Wells Okunbo, a businessman, also pledged the sum of $20,000 per player, while Babajide Sanwo-Olu, Lagos state governor, rewarded the team with $5,000 per player.
The Gernot Rohr’s men defeated Bafana Bafana of South Africa 2-1 to qualify for the semifinals on Wednesday night at the Cairo International stadium.
The Super Eagles will take on the winner between Algeria and Cote D’Ivoire in the semi final game.