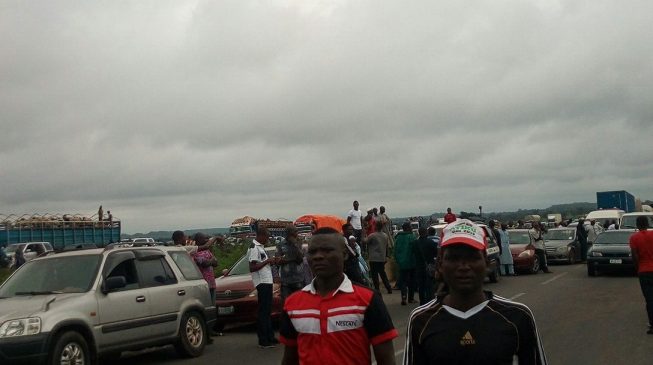 Commercial drivers plying the Abuja-Kaduna highway are currently protesting the death of their colleague.
TheCable reports that the drivers blocked the road with their cars on Friday, protesting the death of their colleague whom they claim was killed by some policemen on duty.
ADVERTISEMENT
Road users said the yet-to-be identified driver was shot by the policemen close to Olam Chicken Feed Company while en route Kaduna in the early hours of Friday.
The incident angered his colleagues who blocked the road with their cars, leading to a gridlock.
Yakubu Sabo, spokesman of the state police command, did not immediately respond to enquiries on the matter.
However, Samuel Aruwan, the state commissioner for internal security, said efforts are being made to clear the gridlock.
He wrote via his Facebook page: “Kaduna-Abuja Road gridlock around Olam Company… We are working and the road will be cleared in a jiffy.
A twitter user by the name Chris Olamor said motorists and travellers plying the road are currently stranded.
ADVERTISEMENT
“Kaduna-Abuja high blocked. Motorists and travelers stranded. Road allegedly blocked by trailer drivers protesting the shooting of a commercial drivers by men of the @PoliceNG stationed on the road last night. It’s a total lock down,” he wrote.