Amid Lockdown in Kashmir, Indian Parliament Approves Resolution to Revoke Its Special Status 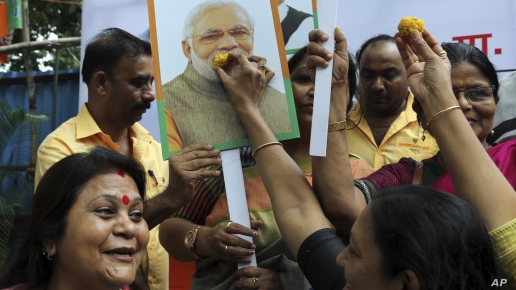 As Kashmir remained locked down for a second straight day, India’s parliament approved scrapping the special status that gave Kashmir significant autonomy, and passed a bill to split the state, VOA reports.
Plunged in a communications blackout and a virtual shutdown, it has been difficult to ascertain the reaction local residents to the radical steps.
ADVERTISEMENT
Curfew-like restrictions continued on Tuesday. Troops patrolled deserted streets with barbed wire barricades in the capital, Srinagar, while the internet, mobile and landlines remained suspended to stem protests in the region wracked by a violent separatist struggle for three decades.
The measures passed by an overwhelming majority in the lower house of parliament are being seen as a message that Prime Minister Narendra Modi will take a tough stance on Kashmir and with rival Pakistan, with whom India has a long-running dispute over control of the Himalayan region.
After the vote, Modi called it a “momentous occasion in our parliamentary democracy.” In a tweet he said, “Together we are, together we shall rise, and together we will fulfill the dreams of 130 crore Indians!”
The steps fulfill a long-standing pledge of his Hindu nationalist Bharatiya Janata Party to end the constitutional provision that allowed Kashmir to have its own constitution and draft its own laws on all matters except foreign affairs, defense and communications.
Kashmir also will be split into two federally administered territories, effectively tightening New Delhi’s grip on the region. One will comprise of the Muslim-majority Kashmir valley and Hindu-majority Jammu, and the second of Buddhist-majority Ladakh. All Indian laws will now apply in Kashmir.
Barring the main opposition Congress Party and a handful of regional parties, the BJP has won wide support for overturning Kashmir’s autonomous status.
Defending the radical moves, Home Minister Amit Shah told parliament the special status granted to Kashmir was responsible for fomenting terrorism in the region, and revoking it would break down the wall created with the rest of India. He said it did not mean that India had given up its claim to Pakistani Kashmir.
The most significant difference now is that with Kashmir placed on par with the rest of the country, outsiders can buy land and live in the region, which was banned earlier. The government says this would open up the area to investment and spur development.
Divided support
But opinion remains sharply divided on whether these steps will help New Delhi meet its goal of integrating Kashmir with the rest of the country and ending an armed rebellion, or whether it will exacerbate tensions in the region where anti-Indian sentiment runs deep.
Congress Party leader Shashi Tharoor warned that it would give a “fresh lease of life to terrorism” and would make Kashmir, where Muslim insurgents have been waging a separatist struggle, more vulnerable to militant groups like Islamic State.
Several political commentators say Kashmiris will view the steps as a ploy to take away their special “identity.”
“India will now come across as the hard Indian state instead of the soft Indian state,” said independent political analyst Neerja Chowdhury, pointing out that previous governments had always tried a “carrot and stick” policy. She says the measure could deepen alienation among Kashmiris.
In New Delhi, most newspapers carried banner headlines on what most hailed as a “bold” move, but also warned that it carried risks and said it was a politically and communally contentious step.
“India’s decision is sure to spark unrest in Kashmir, and especially in the Kashmir Valley, once the Indians end their lockdown there,” said Michael Kugelman, a Washington-based expert on South Asian affairs. He told VOA the move "could even spark a new phase of insurgency, that is if India gives insurgents enough space to operate."
ADVERTISEMENT
The word “historic” has reverberated in parliament during the two-day debate, but in different contexts. Ruling party benches have said they have corrected a “historic” injustice done to Kashmir, while the opposition Congress Party has slammed it as a “historic blunder.”
The move has infuriated pro-India parties in Kashmir, who call it a betrayal of trust. Three Kashmiri political leaders under detention in a government guest house have warned the step will backfire and deepen anger among Kashmiris.