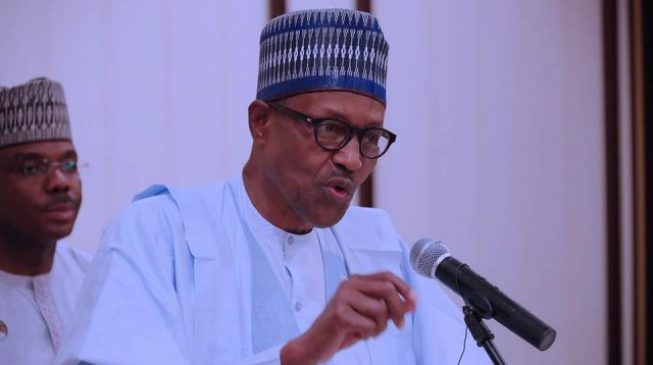 President Muhammadu Buhari says the greatest challenge to Islam is violent extremism.
The president, who said this in his Eid-El-Kabir message, regretted that activities of religious extremists were negatively affecting the image of Islam.
ADVERTISEMENT
Culled from TheCable, he challenged Muslims to distance themselves from those preaching violence in the society, emphasisng on the importance of putting the virtues of the religion into practice and making justice and righteousness their guiding principles.
“We should be the mirror through which others see the virtues of our faith. Islam is a religion of peace and we should avoid violent extremist ideas that give Islam a wrong name because our conducts will leave more lasting positive impressions than what we say by word of mouth,” he said in a statement issued by Garba Shehu, his senior special assistant on media and publicity.
“Violent extremism is the greatest challenge facing Islam today and the only way we can neutralise its evil influence is to distance ourselves from the activities and teachings of those who preach indiscriminate violence against innocent people.
“This flies in the face of the teachings of Islam.”
He advised parents to protect their children from the deadly exposure to violent extremists who, he said, manipulated and exploited children for their own evil agenda.
“Boko Haram became a deadly force and major security scourge because Muslim societies were indifferent from the beginning to the activities of extremist preachers, who manipulate their innocent and gullible followers,” he said.
“Extremism is like cancer which must be detected and destroyed from its early stages of growth.”
ADVERTISEMENT
He, however, assured Nigerians that Boko Haram insurgency, kidnapping and other forms of banditry would be dealt with “uncompromisingly until we see the back of these evils plaguing our country”.