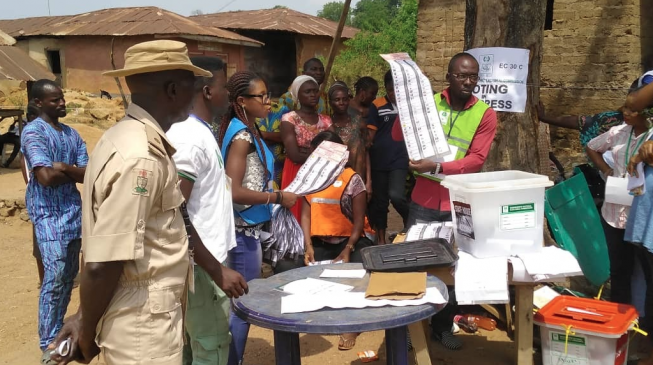 The Centre for Democracy and Development (CDD) says the success of the 2019 elections was hindered by a “badly disrupted” process and misconduct of electoral officials, TheCable reports.
The organisation said this in a report released on Thursday.
ADVERTISEMENT
Tagged: “Counting the votes and ward-level collation during Nigeria’s 2019 presidential election: A Post-mortem”, CDD said the collation process at the ward level was one of the most vulnerable parts of the election process.
Idayat Hassan, CDD director, said while the collation process is critical to credibility of elections, it was observed that, that of this year’s polls was “chaotic, open to manipulation and, in some locations, badly disrupted and opaque.”
“Although ward-level collation is just one of the many challenges to Nigeria’s electoral process, it is an important vulnerability that receives little domestic scrutiny or international attention,” she said.
“Ward-level collation disruptions and manipulations give opportunistic political parties and individual candidates opportunities to dispute the outcome and legitimacy of elections, especially in Nigeria’s most politically contentious wards.
“Such disputes frequently exacerbate local political tensions, empower local political thugs and even help fuel long-running communal conflicts.”
It listed the five major challenges to include: “Missteps and misconduct of INEC staff, deliberate denial of access to observers and media, logistical shortfalls, intentional disruption by politicians, political thugs and party agents, intimidation of collation staff and other malfeasance by security agents.”
KADUNA, LAGOS, SOKOTO AMONG STATES OF CONCERN
CDD said its election observers recorded data on the operational status and conditions at individual polling units in real time, taking notes of incidents affecting the collation exercise.
The organisation said the disrupted collation process was prominent in five states including Kaduna, Sokoto, Lagos, Osun and Rivers.
“Together, these states accounted for 46% of incidents of concern noted by our observers,” it said.
“The situation was especially bad in Rivers State where clashes between political thugs and security personnel—de facto proxy battles between top politicians in the state—disrupted several collation centres.”
INEC LESS TRANSPARENT THAN PREVIOUS ELECTIONS
The organisation added that one of the most noticeable missteps INEC has made following the 2019 elections is “its refusal to publish detailed election results to its website.”
“This opaque approach reverses the tangible—albeit incomplete—progress on results transparency that accompanied the 2011 and 2015 elections,” it said.
“Furthermore, in its rush to certify state-level results, INEC has yet to publish a verifiable and credible paper trail for their ward-and local-level results that demonstrates to Nigerians and the world how they arrived at their official results.
ADVERTISEMENT
“Without evidence voters are asked to trust that INEC’s final results have been calculated accurately and free from outside manipulation despite numerous reports of disruptions to ward-level collation.”
The organisation partnered with the online independent news paper during the elections.