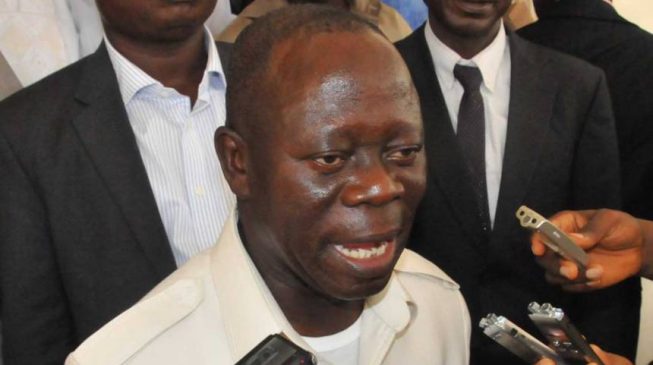 Frank Okiye, speaker of Edo state house of assembly, has described the crisis rocking the state as a smokescreen by Adams Oshiomhole, national chairman of the All Progressives Congress (APC), to deny Godwin Obaseki, governor of the state, a second term.
Fielding questions from journalists on Friday, TheCable reports that Okoye said the planned takeover by the senate was part of Oshiomhole’s “grand plot” to remove Obaseki.
ADVERTISEMENT
A misunderstanding between Oshiomhole and Obaseki had led to the factionalisation of the state assembly.
Nine lawmakers loyal to Obaseki were secretly inaugurated on June 17, leaving their colleagues in the camp of Oshiomhole stranded.
The senate had set up a committee to look into the crisis in the state. On Tuesday, the committee submitted its report and the upper legislative chamber gave the governor a week ultimatum to issue a fresh proclamation for the inauguration of the state house of assembly.
But Okiye who was elected speaker on June 17 said the Edo assembly is not the real target of the APC chairman.
“The truth is that the Edo state assembly and my office as the speaker are not the real targets of this crisis. The plot is actually aimed at Governor Obaseki and the endpoint is to stop him from getting a return ticket as governor next year,” Okiye said.
“Comrade Oshiomhole is actually after Obaseki, the state assembly was only used a smokescreen to his plans. The idea now is to take over the house, destabilize the state and possibly impeach the governor.
“The Edo Peoples Movement that originated this crisis has boasted that they will ensure that the governor does not come back for the second tenure. I have said it before on several occasions that we know who is beating the drum for them in the national assembly.
“They have found themselves in the position of stooge to make it look like they cannot think outside the box, it’s unfortunate.”
He added that legislative proceedings were ongoing at the chamber, advising his aggrieved colleagues to come over to the assembly to regularise their documents as lawmaker-elects.
“We have been sitting as a parliament. I just drove out of office after the plenary session. Lawmakers are going about their committee work. We just invited commissioner for works to appear before the house over a matter of public importance,” he said.
“The door is open for the remaining lawmaker-elect, they should come to assembly, complete and regularize their documentation and they will be sworn in.
“The constitution says when the house is unable to sit, that means when it cannot perform the function it was supposed to perform.
“And this notification was supposed to be given or declared by the governor who will say that there is no one to clear my commissioners, oversee my legislative requests and so on. That was what the constitution contemplated, not the national assembly sitting over a state assembly as if we are a colony under them.”
ADVERTISEMENT
When contacted to react to Okiye’s allegation, Simon Egbebulem, spokesman of Oshiomhole, said he would not comment on the issue.