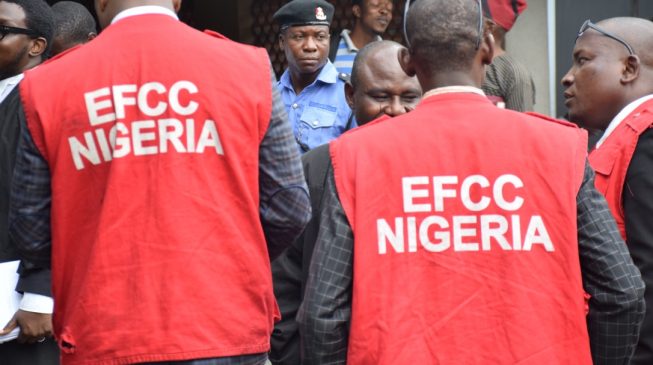 The Economic and Financial Crimes Commission (EFCC) says it arrested 28 persons and recovered N486 million in connection with the online scam being investigated by the Federal Bureau of Investigation.
Speaking at a press conference in Lagos on Tuesday, TheCable reports that Ibrahim Magu, chairman of the EFCC, said collaboration between the commission and the FBI led to the recovery of the funds.
ADVERTISEMENT
The FBI had released a list 0f 77 Nigerians allegedly involved in what it described as one of the largest scams in US history.
Magu, who was represented by Mohammed Rabo, zonal head of EFCC in Lagos, said the recovered money was traced to various commercial banks.
He also said joint operations coordinated by the EFCC had resulted in 28 arrests, adding that 14 suspects had been charged and convicted.
“Nine of the suspects are currently undergoing trial, while five are still under investigations,” he said.
“Over 80 cases are still under investigation from the EFCC-FBI joint operations. From 2018 to date, the EFCC had launched a sustained operation on perpetrators of various computer-related frauds, which resulted in over 200 arrests, 130 convictions and recovery of a large number of exotic cars and properties suspected to have been acquired through the proceeds of crime.
“We had independently launched intensive investigative actions against the infamous Yahoo Yahoo boys culminating in various strategic raids and onslaught on their hideouts.
“Our efforts in this regard have recorded tremendous successes leading to a number of arrests, prosecutions and convictions.”
The EFCC chairman also called on the media to continue to lend its voice to the fight against corruption, saying “no one has the monopoly of knowledge of how the fight should be fought and won”.
“All the critical stakeholders, particularly the media, must continue to collaborate and cooperate with us to make the fight a success,” he said.
“I urge you to continue to help us sensitize, mobilize and educate all the critical stakeholders to continue to support the fight against economic and financial crimes. We must collectively strive to achieve the Nigeria of our dream.”
ADVERTISEMENT
Nigerians have been reacting to the list of the FBI, highlighting its negative effect on the country.