Ekweremadu returns to Nigeria, speaks on attack in Germany 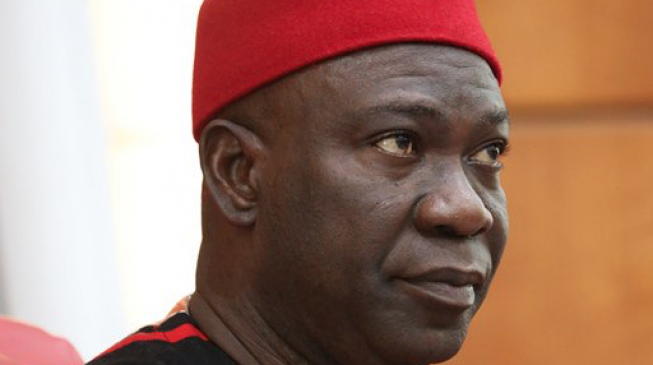 Ike Ekweremadu, former deputy senate president, has returned to Nigeria after the attack on him by members of the Indigenous People of Biafra (IPOB) in Nuremberg, Germany.
TheCable reports that the lawmaker was attending the Second Annual Cultural Festival and Convention organised by Ndi-Igbo in Germany when the embarrassing incident took place.
ADVERTISEMENT
Speaking at Nnamdi Azikiwe International Airport in Abuja on Monday, the lawmaker narrated how it all started.
“I was informed that the place is full and that the mayor of the city where we visited was very cooperative. And the Nigerian ambassador to Germany was also at the venue, so we had to rush down,” he said.
“When I got there, I saw a lot of Igbo people who had assembled so I was excited and I came out of the car because I saw so many people, I wanted to say hello to them. We were exchanging pleasantries. So, they were a couple of Igbo people, IPOB and emblems so one of them now accosted and blasted me and said that we didn’t do much when we had python dance (a military operation) in the south-east. I told him let me exchange greetings with others and I can now respond to him later as I was just coming in. So he held my hand and said no, I now removed my hand and started shaking other people. So at that point, the organisers apparently noticed what was going on and wanted to resist them, then the fight ensued.”
ADVERTISEMENT
IPOB has come under severe criticisms over the incident.