EXTRA: Protect yourself if el-Rufai kneels before you, says Shehu Sani 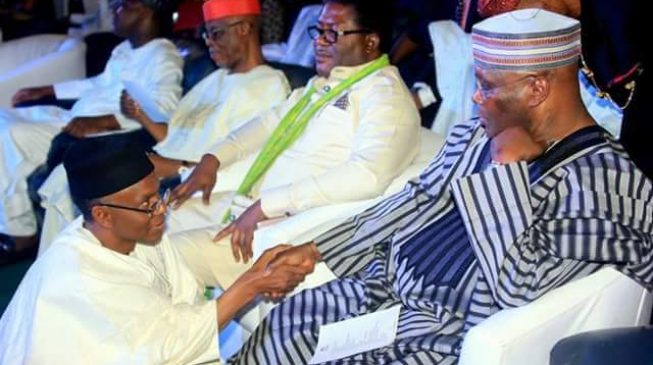 Shehu Sani, a former senator representing Kaduna central, has taunted Nasir el-Rufai, governor of Kaduna state, saying anyone he kneels before should protect his groins.
TheCable reports that the ex-lawmaker said this in reaction to a comment credited to el-Rufai.
ADVERTISEMENT
The governor had said he reduced Sani to a blogger and exiled Sulieman Hunkuyi, a former senator representing Kaduna north, to China.
Sani and Hunkuyi have been at loggerheads with el-Rufai over issues bordering on governance in Kaduna.
The former lawmakers and Danjuma Laah, senator representing Kaduna south, blocked a World Bank loan to the state in the last assembly.
In a statement on Friday, Sani said he was not responsible for removing the name of the governor from the list of those that accompanied President Muhammadu Buhari to Japan “after wasting his three days in Abuja”.
He advised el-Rufai to “eat Yahuza Suya Since you missed the Sushi”.
“My attention has been brought to a statement credited to the Governor of Kaduna state Mallam El-Rufai whom he claimed to have ‘turned me to a blogger and exiled Hunkuyi to China’,” he said.
“I’m pleased to have reduced the height of El-Rufai from a Dwarf to a leper who was rejected by the Governors forum.
“El-Rufai is more focused on his presidential ambitions while his state is under the siege of Kidnappers.
“Mr El-Rufai,face the President’s men who threw away your list of ministers and threw out your luggage from Japan trip.
ADVERTISEMENT
“He is still obsessed with World Loans and using it as an excuse to justify his incompetence while his counterparts in other states are busy commissioning and executing projects. SINCE YOU ARE STILL ANGRY FOR NOT GETTING THE LOAN,I CAN HELP YOU WITH SOME HIGH HEELS SHOES TO INCREASE YOUR HEIGHT.
“If El-Rufai kneels down before you, protect your groins.”