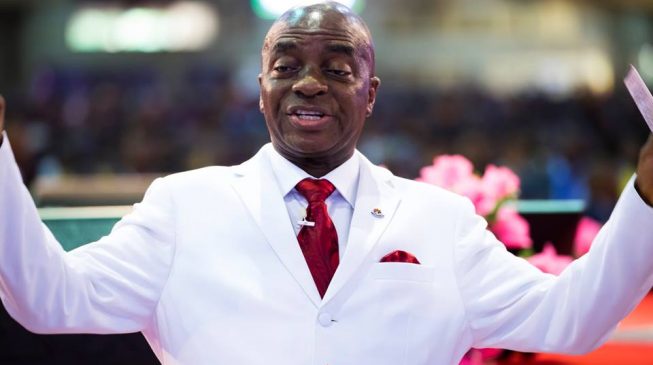 It is now five months that nothing has been heard about Moses Adeleke, a pastor with the Living Faith Church Worldwide (Winners’ Chapel) in Maiduguri, Borno state capital, who was kidnapped by Boko Haram insurgents.
Oyeleke was abducted on March 13, 2019 together with his assistant, Abraham Amuta, a national youth corps member, along Chibok road.
ADVERTISEMENT
The two were said to be members of a committee set up by the church to distribute relief materials to internally displaced persons (IDPs). They were abducted while engaging with the IDPs.
The abduction of these two has attracted no public outcry, neither has it received any media attention. It would appear they have been abandoned to fate.
The two men joined hundreds of other Nigerian citizens with unknown identities held in captivity by the Boko Haram insurgent.
Checks by TheCable revealed that the government is engaged in negotiations with the insurgents using several individuals in the north-east.
But a top government official said “there is no sense of urgency in any of these talks as if precious human lives are not at risk”.
Also, security sources told TheCable that the insurgents “don’t seem to be making the kind of compromises that would normally lead to a breakthrough in a matter of this nature, a development government finds unhelpful”.
POLICE, GOVERNMENT NOT FORTHCOMING
Speaking with TheCable at the weekend, Ruth Oyeleke, the kidnapped pastor’s wife, said nothing has been heard about efforts made to secure the release of her husband.
She told TheCable that the police have not been forthcoming with information regarding any progress made as the senior pastor of her church has been in touch with them.
She said the pastor of her parish, members of the church as well as family members have been helpful and supportive “in these trying times”.
“They are doing their best; they have really been trying their best,” she said.
“Our pastor and church members have been very helpful. They have been the ones around me. We have not heard anything from the police and government and our senior pastor has been the one in touch with them. They are not forthcoming with any information about what they are doing to help my husband.
“The pastor and members of the church that have been with me. They pray with me, encourage me to be hopeful; they are really trying.
“They pay me salary when they pay others which I have been using to take care of myself and our two children.”
Asked if there is an assurance that her husband will be released, she replied: “I believe in God. I trust in him, he was the one who called and sent my husband. And I  know he has not abandoned him. I trust in him to bring my husband back; I’m holding on to my faith.”
When TheCable contacted Usman Usmobik, PPRO of the state command, he said he would get back as soon as he gets “clearance”.
David Oyedepo (pictured), founder of the Living Faith Church Worldwide recently placed curses on the killers of Jeremiah Omolewa, a resident pastor of the church in Romi New Extension, a suburb of Kaduna.
Omolewa was travelling with his wife, Oluwakemi, and son to Abuja when he was shot dead.
ADVERTISEMENT
While his son escaped, the gunmen took his widow into the forest and contacted the family to demand a ransom of N50 million.
She was later released but there was no confirmation if any ransom was paid.