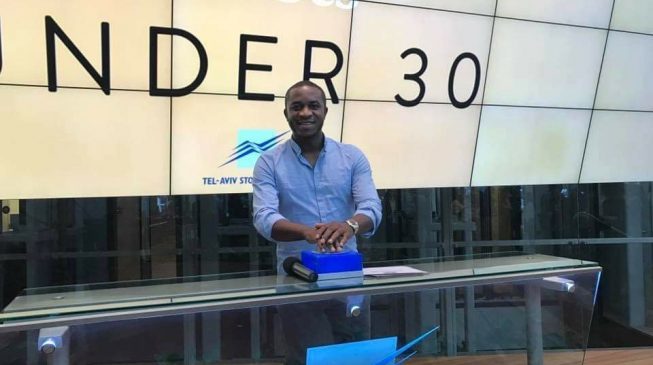 Obinwanne Okeke, Invictus Group CEO, who is popularly known as Invictus Obi, was arrested at the Dulles International Airport, while leaving the United States, TheCable can report.
According to information obtained from the US federal court in Virginia, US, Okeke was scheduled to return to Nigeria four days after a complaint was filed against him at the court, and was arrested at the airport, just before he got on the flight to Nigeria.
ADVERTISEMENT
An order of detention pending trial was filed on August 2, 2019, on the grounds that “by a preponderance of evidence that no condition or combination of conditions of release will reasonably assure the defendant’s (Okeke) appearance as required”.
A source familiar about the matter told TheCable via mail that “the attached court documents from the US federal court in Norfolk, Virginia confirm that Okeke was indeed arrested by the FBI, on August 6 at the Dulles International Airport”.
According to his arrest warrant obtained by TheCable, he was taken for violation of US laws as it concerns “conspiracy to commit computer fraud” and “conspiracy to commit wire fraud”. 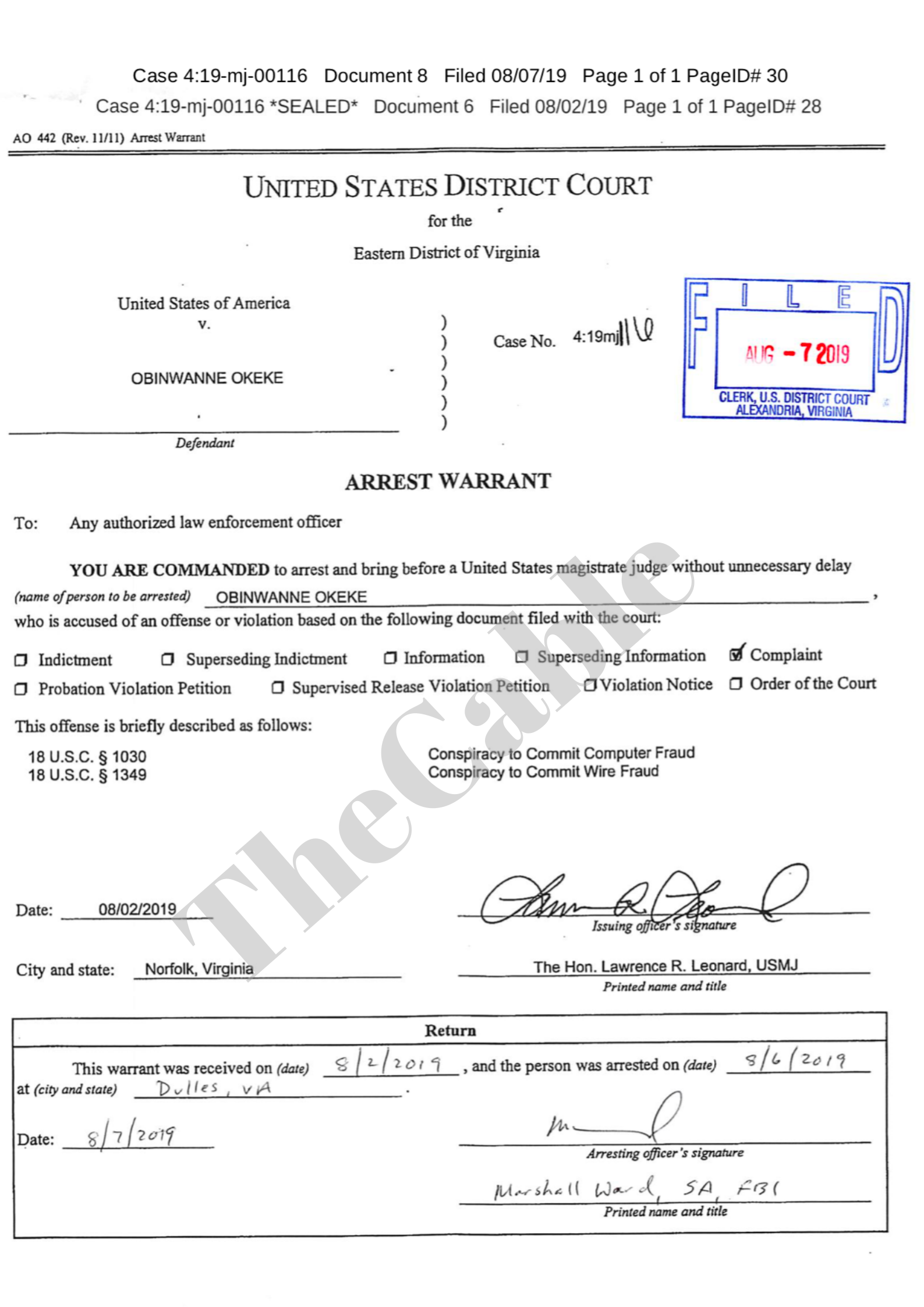 The Arrest Warrant
The affidavit sworn by Marshall Ward, a special agent with FBI, had said as of August 2, 2019, “the date of this application, OKEKE is currently in the United States, and is scheduled to depart the country on August 6, 2019”.
“Therefore, a warrant for his arrest is immediately required to apprehend him and prevent his retum to Nigeria, where he would be beyond the reach of U.S. law enforcement.”

In June 2018, Unatrac Holding Limited, a company which deals in sales of heavy industrial and farm equipment, was said to have approached the Federal Bureau of Investigations (FBI) over a breach in the email account of its chief financial officer where a fraudulent transfer of funds was done.
The intruder was said to have sent phishing emails containing a web link, purportedly to the login page of the CFO’s online email account hosted by Microsoft Office 365.
Believing the link to be genuine, the CFO was said to have imputed his username and password from where the intruder got full access to the account and sent a fraudulent wire transfer request to the company’s internal financial team.
Acting under the impression that the email emanated from the CFO, the finance staff processed approximately 15 payments between April 11 to 19, 2018, totalling $11 million.

‘INVICTUS OBI MAY GET CLOSE TO 20-YEAR JAIL TERM’ 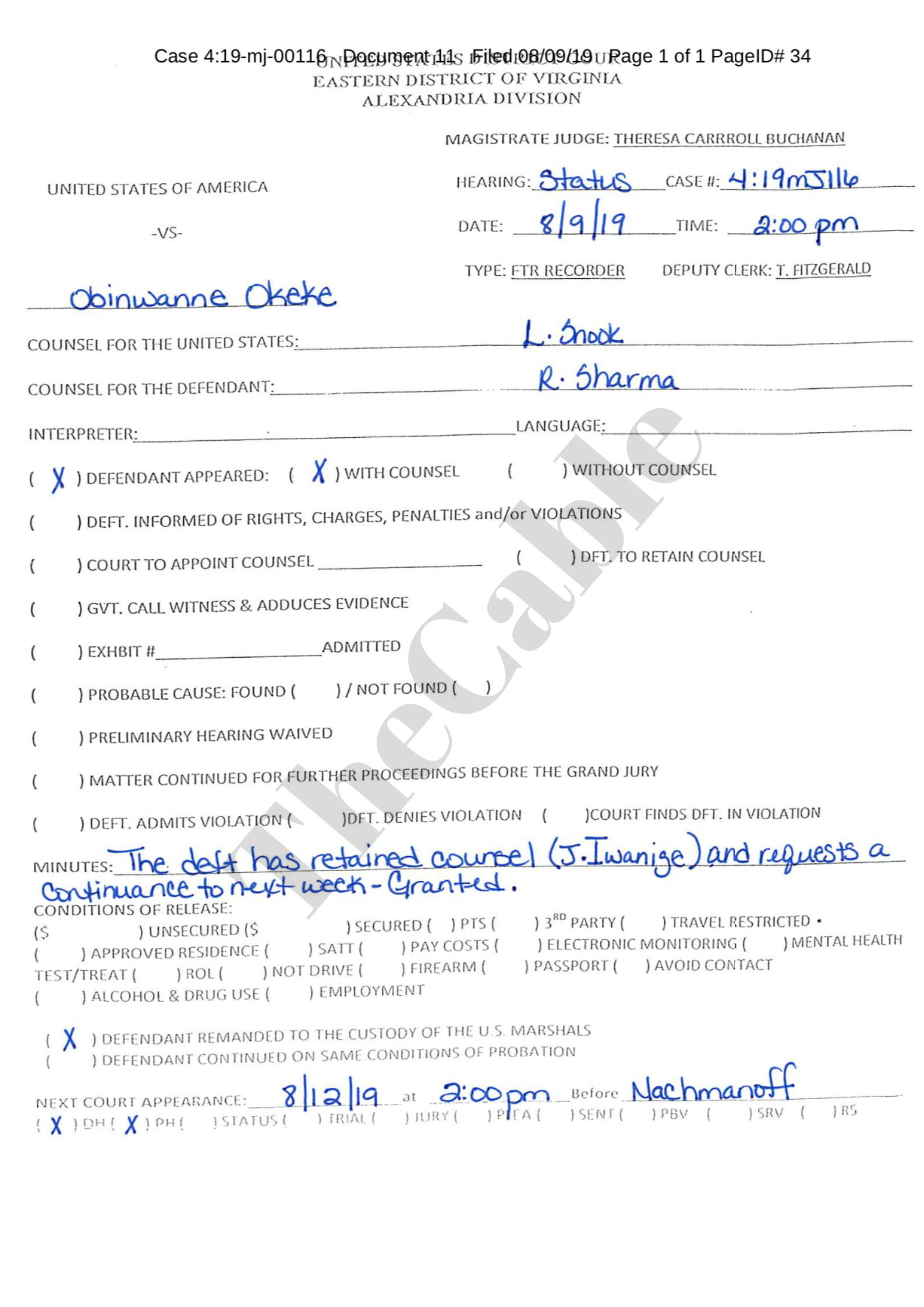 Okeke, who requested to for substitution of legal counsel is now being represented by  John O. Iweanoge, II and THE IWEANOGES FIRM. The Iweanoges took over from Rahul Sharma, a US federal public defender.
Based on precedence, Okeke could get between five and twenty years jail term for conspiracy to commit computer and wire fraud.
According to the Legal Information Institute, anyone who “knowingly and with intent to defraud, accesses a protected computer without authorization, or exceeds authorized access, and by means of such conduct furthers the intended fraud and obtains anything of value, unless the object of the fraud and the thing obtained consists only of the use of the computer and the value of such use is not more than $5,000 in any 1-year period”.
If the financial value of information taken exceeds $5,000, the convicted shall be subject to a fine or imprisonment for not more than ten years, or both.
As for wire fraud, a person convicted for a single act of wire fraud can result in fines and up to 20 years in prison, according to criminal defence attorneys in the United States.
ADVERTISEMENT
Persons familiar with wire fraud cases in the US told TheCable that a combination of these sentences could result in a higher jail term for the estranged Nigerian entrepreneur.
Okeke has since faded of social media.