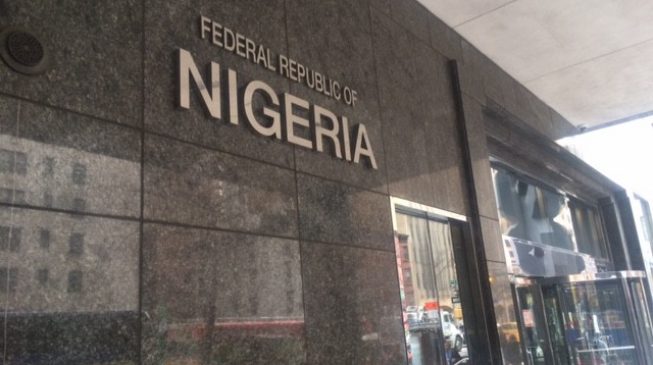 The federal government has announced a reduction in the amount payable by citizens of the United States of America seeking Nigerian visas.
TheCable reports that this comes 24 hours after the US authorities increased the cost of visa application for Nigerians under a “tit for tat policy”.
ADVERTISEMENT
In a statement, the US consulate in Nigeria had said America was reciprocating the extra visa fee the Nigerian government charges its citizens.
The consulate had explained that the extra cost would be applicable to only those whose visa requests were granted.
It had said while America charges Nigerians $160  for visa application, its citizens seeking Nigerian visa were paying $110 extra.
But in a statement on Wednesday, Mohammed Manga, spokesman of the ministry of interior, announced that the visa fee of Americans had been reduced.
He said Rauf Aregbesola, minister of interior, had directed that US citizens should pay $160 for visa application with effect from Thursday.
“The attention of the Ministry of Interior has been drawn to the introduction of reciprocity of Visa Fees by the United States of America. The Ministry acknowledges that there were engagements with the United States Embassy on the issue and in the aftermath, a Committee was set up to conduct due diligence in line with the Ministry’s extant policy on reciprocity of Visa fees,” the statement read.
“The Committee had concluded its assignment and submitted a Report but the issuance of authorisation for its recommendations was delayed due to transition processes in the Ministry at the policy level.
“The Honourable Minister of Interior, Ogbeni Rauf Aregbesola has approved the decrease of Visa charges payable by US citizens in line with reciprocity policy as recommended by the Committee.
ADVERTISEMENT
“Accordingly, the Comptroller-General of Nigeria Immigration Service (NIS), Muhammad Babandede, has been directed to implement the decrease in Nigeria’s Visa charges to US Citizens with effect from Thursday, 29th August, 2019.”