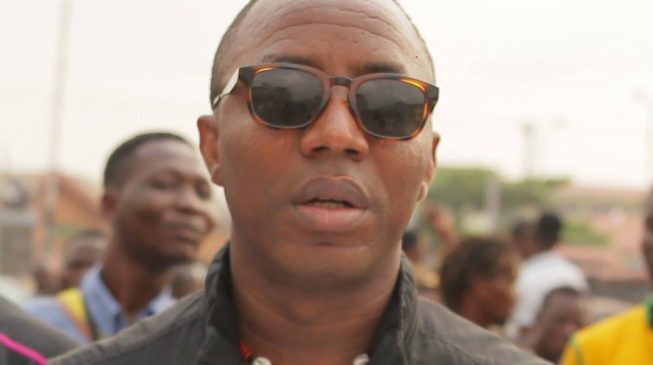 The driver of Omoyele Sowore, convener of #RevolutionNow, has narrated how operatives of the Department of State Services (DSS) arrested the activist.
Sowore had posted a tweet on his arrest at 1:25am on Saturday.
In a social media post, the driver, who refused to disclose his identity, said Sowore was picked up in a “gestapo manner”.
ADVERTISEMENT
“At around past 1am, the armed men knocked on the door. I noticed immediately that these knocks were strange. And didn’t open. I looked and I saw men armed to the teeth,” he wrote.
“They started forcing their way in like armed robbers. But I knew they were DSS men, knowing fully well the attention RevolutionNow has garnered. Sowore wanted to open at first but I immediately told him who they are. He retreated and like magic, he was not in the room when they forced their way in- 8 of them.
“That was when he managed to tweet. By this time, I had been beaten and handcuffed. Phones were snatched from me. An order to block all exits came from the leader when Sowore was not found inside. He was later arrested at the gym in a gestapo manner and dragged after a bit altercation.”
Narrating how he rushed to pick Sowore’s car when the cuffs were off his hands, TheCable reports that the driver said the security operatives later threatened to shoot him for trying to prevent Sowore’s arrest.
“I quickly seized that opportunity to drive his car (I drive him) to block their SIENNA and Hilux they came in. They hit the Lexus Jeep like kidnappers would do to make way for themselves,” he wrote.
I followed them immediately till we got to CMD road around Ketu when one of them came down from the SIENNA and corked his gun, threatening to shoot me. I had to escape at that point.”
ADVERTISEMENT
Sowore, a presidential candidate of the African Action Congress (AAC), had tweeted hours to his arrest that; “All that is needed for a #Revolution is for the oppressed to choose a date they desire for liberty, not subjected to the approval of the oppressor.”
Peter Afunanya, spokesman of the DSS, did not immediately respond to message seeking updates on the arrest.