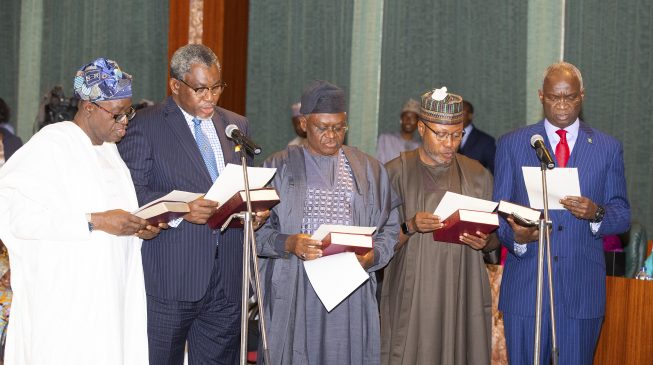 President Muhammadu Buhari has constituted  his cabinet of 44 portfolios – but there is a certain “familiarity” about the composition.
Hinging on zonal distribution, some regions have more junior ministerial positions than others, just as another region takes a large slice of the senior positions.
ADVERTISEMENT
Out of the 44  positions, the north-west alone, Buhari’s zone, has 10 senior ministerial portfolios (including the president’s portfolio as substantive minister of petroleum), but no junior portfolio.
The southeast has three senior ministerial positions and three junior portfolios; the south-south has three substantive positions in the cabinet, and four junior.
The south-west has five substantive positions, and three junior positions. The north-central has three senior positions, and four junior positions, while the north-east has four senior positions and three junior positions.
The north-west takes a generous portion both in the number of portfolios and in the strength of the offices.
NORTH-WEST GAVE BUHARI MORE VOTES
In the last presidential election, Buhari got the highest number of votes from the north-west zone – 5.9 million. Though he won in the 19 northern states, Kano alone gave the president 1.4 million votes.
In the south-west, Buhari won the election in four states – Lagos, Ogun, Osun and Ekiti – with 2.05 million votes. However, he did not win in any state in the south-east. He had only 403, 968 votes; about 25 percent from the entire region.
He garnered 15.2 million votes and won the election with 56 percent of votes from across the country.
The portfolio distribution appears to reflect the voting pattern in the last election.
‘NEXT LEVEL OF SECTIONALISM’
Afenifere and Ohanaeze, socio-cultural groups, are not home and dry with the portfolio distribution. Yinka Odumakin, spokesman of Afenifere, has described it as sectional.
”That is next level of sectionalism in your face, and incorrigibility,” he said.
”There have been complaints about all these things since the first term, now, it has been done in a super way. So, that is the next level. Welcome to the next level.”
Uche Achi-Okpoga, spokesman of Ohanaeze, says the group is not surprised because the president has always shown preference for his region.
”It is not a surprise. We were not expecting anything less. We have a president that does not mince words. He stated in his first tenure that he would not sacrifice those who gave him 97 percent votes to those who gave him may be five percent. So, why should we be surprised that he gave juicy and senior positions to his kinsmen,” he said.
TheCable presents the portfolio distribution according to regions.
NORTH-CENTRAL
NORTH-EAST
NORTH-WEST
SOUTH-EAST
SOUTH-SOUTH