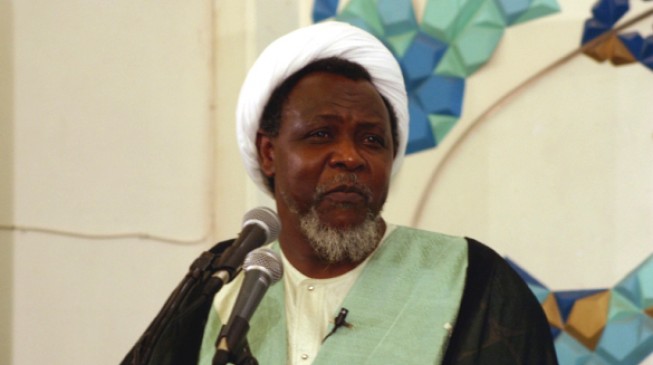 The Kaduna state government says Ibrahim El-Zakzaky, leader of the Islamic Movement in Nigeria (IMN), must not seek asylum in India.
In a statement signed by Samuel Aruwan, commissioner for internal security and home affairs, the government of Kaduna which is currently prosecuting El-Zakzaky, said steps must be taken to ensure the IMN leader and Zeenah, his wife, do not become fugitives from justice.
ADVERTISEMENT
According to TheCable, the government said the duo should not frustrate the trial by claiming asylum or the status of political prisoners in India.
On Monday, a high court in Kaduna granted El-Zakzaky and his wife the permission to travel to India for treatment. They have been in detention since 2015 following a clash between IMN members and some soldiers.
Through Femi Falana, their counsel, El-Zakzaky and his wife had applied for medical leave, citing poor health.
But Aruwan said while the government is not opposed to anyone seeking medical treatment in any part of the world, so long it is not at the expense of the government, it has filed for strict supervision of the medical leave.
“Malam Ibrahim El-Zakzaky is facing criminal trial before the Kaduna High Court on charges filed in April 2018. The Kaduna State Government is prosecuting Malam Ibrahim El-Zakzaky on an eight-count charge, including culpable homicide punishable with death,” the statement read.
“On Monday, 5th August 2019, the Kaduna High Court granted an application for medical leave filed by Mr. El-Zakzaky and his wife, Mrs. Zeenah Ibrahim. The court specifically said it was granting the two defendants ‘leave to travel out of Nigeria for urgent medical treatment at Medanta Hospital, India, under strict supervision of the Respondent and to return to Nigeria (for continuation of trial) as soon as they are discharged from the hospital’.
“The Kaduna State Government respects the right of anyone to seek treatment anywhere in the world, even for malaria or common cold, so long as they are paying for it. But in the case of persons facing trial for serious offenses, necessary safeguards are required to ensure that such persons do not become fugitives from justice or frustrate trial by claiming asylum or the status of political prisoner in the host country.”
Aruwan said while the Kaduna government respects the court’s ruling on medical leave, it is not in agreement with the premises on which it is based, and will, therefore, file an appeal.
The statement said El-Zakzaky and his wife consented to being held in custody of the Department of State Services (DSS).
“The court ordered that the defendants be kept in prison custody and that the defendants be allowed access to their personal physicians alongside physicians of the State. However, at his request, Mr. Ibrahim El-Zakzaky and his wife are being kept in SSS facilities which were deemed more comfortable than the Kaduna Prison,” the statement read.
“The trial suffered initial delays because the third and fourth defendants/applicants remain at large. That was the case when the matter first came up in court on 15th May 2018. It was adjourned till 21st June 2018 because the charges had not been served on the third and fourth defendants. An accident involving the trial judge further delayed the hearing scheduled for 21st June 2018. Subsequently, the arraignment of the first and second defendants was done on 2nd August 2018.
“However, the Kaduna High Court heard Malam El-Zakzaky’s application for leave to seek medical attention abroad on Monday, 29th July 2019. At the hearing, counsel to the Kaduna State Government opposed the application for medical leave largely because it was based on medical reports not issued by a government medical facility. The court granted the application on Monday, 5th August 2019.
ADVERTISEMENT
“It is the considered contention of the Kaduna State Government that decades of impunity emboldened the IMN to engage in various unlawful activities culminating in the tragic events of December 2015. In prosecuting the case, the state government is affirming simple canons of the rule of law, that no one is above its long arm and that all persons are equal in its eyes. Mob pressure, such as the carnage visited on the streets of Abuja to force Mr. El-Zakzaky’s release without due process, cannot be allowed to succeed.”