Macron condemns Bolsonaro for ‘disrespectful’ post about his wife 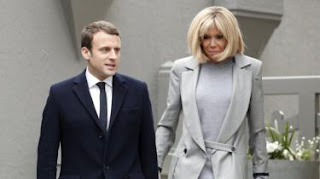 French President Emmanuel Macron has lashed out at Brazil's Jair Bolsonaro for endorsing "rude" remarks about his wife.

According to BBC, a supporter of the Brazilian president mocked Mr Macron's wife, Brigitte, 66, in a Facebook post.
ADVERTISEMENT
The post contained a photo contrasting the French first lady's appearance with that of Mr Bolsonaro's wife, Michelle Bolsonaro, 37.
"Now you understand why Macron is persecuting Bolsonaro?" it reads.
In response to the comment, Mr Bolsonaro wrote (in Portuguese): "Do not humiliate (him)... man, ha ha."
Asked about Mr Bolsonaro's remarks, Mr Macron said it was "extraordinarily rude" and "sad".


"He said very disrespectful things about my wife. I have great respect for the Brazilian people and can only hope they soon have a president who is up to the job," Mr Macron said at a news conference at the G7 summit in Biarritz on Monday.
The exchange highlights the acrimony between Mr Macron and Mr Bolsonaro in a diplomatic spat sparked by the Amazon fires.

Mr Macron is spearheading efforts to get world leaders to do something about the fires ravaging parts of the Amazon rainforest.
Mr Macron has described the wildfires as an "international crisis", which critics have blamed on Mr Bolsonaro's anti-environmental rhetoric and lack of action on deforestation.
But Mr Bolsonaro, whose country is not in the G7, accused Mr Macron of having a "colonialist mentality".


The right-wing Brazilian president has a long track record of making abusive comments about women, black people and minorities.
One of his most infamous remarks came during a heated debate in parliament with left-wing congresswoman Maria do Rosario in September 2014.
ADVERTISEMENT
"I wouldn't rape you because you don't deserve it," Mr Bolsonaro told Ms Rosario.
Mr Bolsonaro also caused uproar while talking about his own daughter during a public event in April 2017. "I have five children. I had four boys, and in the fifth, I weakened and a girl came," he said at the time.
Emmanuel Macron - Jair Bolsonaro