Malami: Nigeria’s deal with P&ID was designed to fail 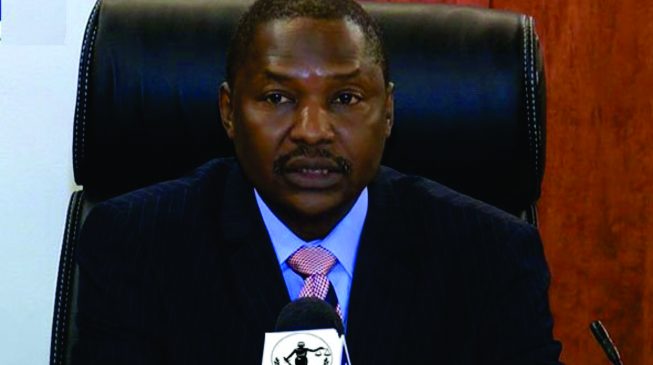 Abubakar Malami, attorney-general of the federation (AGF), says Nigeria’s deal with
Process and Industrial Developments (P&ID) was designed to fail.
In 2010, the federal government entered into a deal with the company to build a gas processing plant in Calabar, Cross River state.
ADVERTISEMENT
However, the deal collapsed because Nigeria did not meet its end of the bargain.
On August 16, a British court gave P&ID the go ahead to seize Nigerian assets worth $9 billion after it sued the country.
Addressing a press conference on Monday in Abuja, TheCable reports that Malami said the deal was between the P&ID and the ministry of petroleum resources which does not produce gas.
The justice minister said those who entered into deal on behalf of the country subjected Nigeria to “economic sabotage.”
“The agreement was designed to fail. There were the P&ID and the federal ministry of petroleum resources,” he said.
“The fact remains, you can not sign an agreement for a product you do not have. It is against this background that there is need for a criminal investigation.”
Also speaking at the conference, Godwin Emeifele, governor of the Central Bank of Nigeria (CBN), said the apex bank does not have any record to suggest that the company brought in resources to invest in Nigeria.
“We note that it is a foreign company. If you are bringing in capital you will fill a form A,” he said.
“We have gone through our records and we don’t have anything to show that this company brought in one cent into the country.
“The money they want to take is our commonwealth, it belongs to all of us.”
The CBN governor said if the company has any proof of their investment in the country, “they should come forward with it.”
On his part, Lai Mohammed, minister of information, said some unidentified people with vested interests in the past administration entered into the deal with P&ID.
“We want to place on record that the federal government views with serious concerns the underhanded manner in which the contract was negotiated and signed,” the minister said.
“Indications are that the whole process was carried out by some vested interests in the past administration, which apparently colluded with their local and international conspirators to inflict grave economic injury on Nigeria and its people.
“In view of the above, and in an attempt to unravel the circumstances surrounding the entire transaction, the Honourable Attorney General of the Federation, with the approval of Mr President, has requested the Economic and Financial Crimes Commission (EFCC), the National Intelligence Agency (NIA) and the Inspector General of Police (IGP) to conduct a thorough investigation into the company, the circumstances surrounding the agreement and the subsequent event, which includes commencing a full-scale criminal investigation.”
Mohammed said the government is challenging the award against the country.
“It is worth mentioning that in challenging the award, the Federal Government relied upon an expert report analyzing the damages given to the P&ID,” he said.
ADVERTISEMENT
“The expert concluded that the damages; were clearly unreasonable and manifestly excessive and exorbitant; went far beyond any legitimate protection of the commercial interest of the P&ID; were completely wrong and obviously unjustifiable; and that the damages overcompensated P&ID on a frankly gargantuan scale and imposed a punitive award on Nigeria.
“It was on this ground and others that the Federal Government took all available steps to resist enforcement before the courts of the United Kingdom (UK).”