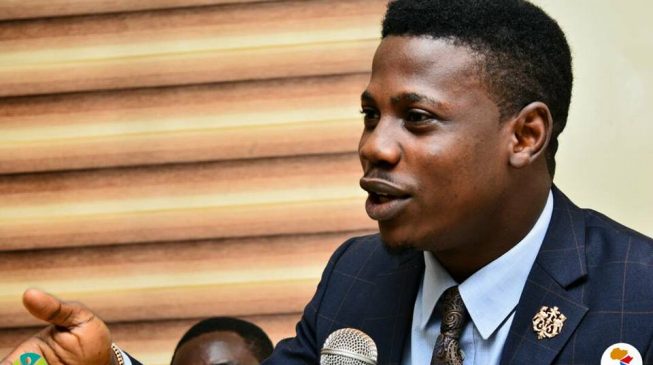 Mark Okoye made history in 2016, when he was appointed commissioner for economic planning and budget development in Anambra state. He became the youngest state commissioner in Nigeria’s history. He was 30. But such is life, records are set, records are broken; in 2019, Governor Seyi Makinde, fondly known as GSM, helped shatter this record when he appointed 27-year-old Seun Fakorede as commissioner for youths and sports in Oyo state.
Upon the appointment, Fakorede’s friends poured out goodwill messages on social media congratulating him for a “well-deserved appointment”. On the brink of history, Fakorede was quiet, saying nothing on any of his social media pages, up until Thursday, which was the day for his screening by the Oyo state house of assembly.
ADVERTISEMENT
“This is to express my gratitude to Nigerians, especially the Youth, for the outpour of love and best wishes since my nomination as Commissioner was announced,” Fakorede said.
“I’m grateful. I’ve been overwhelmed since the announcement. I express my gratitude to our Governor, His Excellency, Engr. Seyi Makinde. I promise not to disappoint the Youth Constituency.” 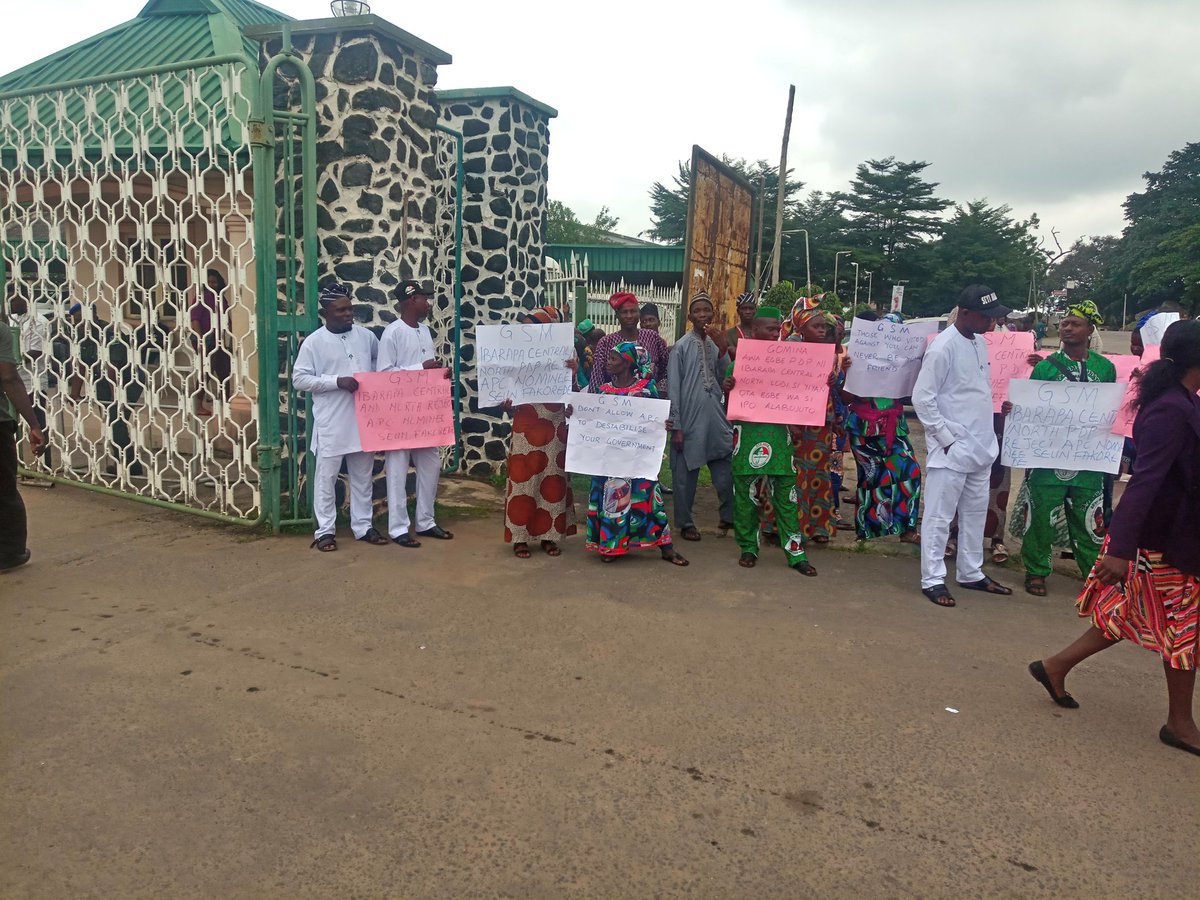 PDP loyalists protesting Fakorede’s nomination
But barely had Fakorede been confirmed when some people raised concerns about his suitability as a commissioner because of his age. Some elders on Thursday took to the Oyo state secretariat, protesting his appointment.
Others argued that Fakorede, perceived to be an All Progressives Congress (APC)  faithful, should not be working with Makinde, a Peoples Democratic Party (PDP) governor.
“GSM, Ibarapa Central/North PDP reject APC nominee, Seun Fakorede,” one of the placards read. Another one said the governor was breaking his promises to the PDP in less than 10 days.
But despite the protest, the Oyo state assembly confirmed the nomination of Seun Fakorede, effectively making him the youngest commissioner in Nigeria’s history from August 22, 2019. 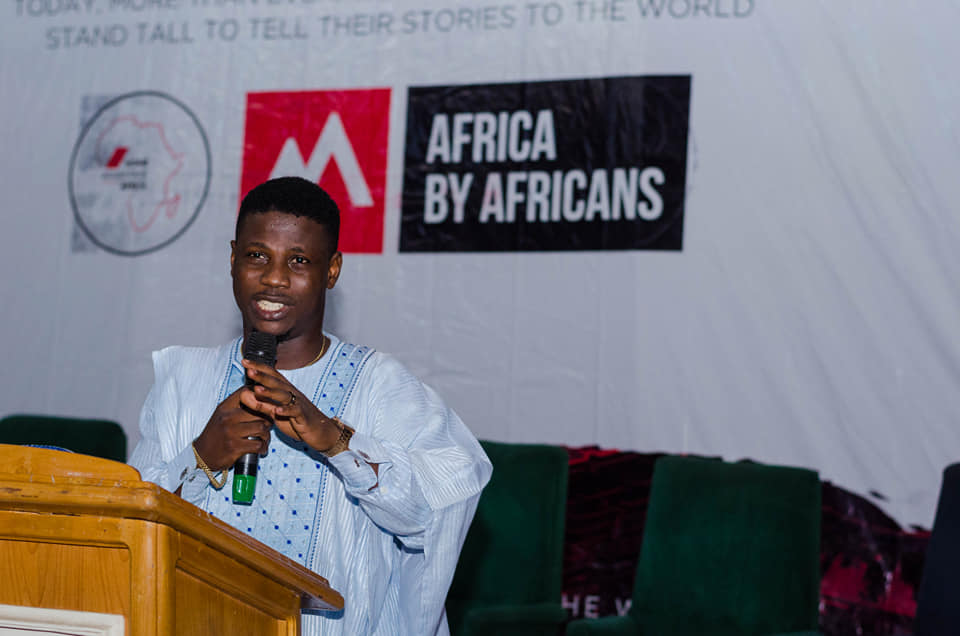 The commissioner, not the young commissioner
Fakorede is a 2016 graduate of Obafemi Awolowo University, Ile-Ife, where he studied civil engineering. As far as origin goes, he is a native of Idere area of Ibarapa Central local government in Oyo state.
He believes that he and other young people are who they are, and they should not reduce who they are by saying they are young.
“I run Home Advantage Africa and what we do there? Our great mandate is to make sure we deliver the future to Africa. How do we do this? We try to change the narrative and change the story entirely because a lot of us believe that we are too young,” Fakorede said in June 2018.
“We believe that we are young and the society, the community has fashioned it in such a way that if you are brilliant, if you;re young and doing things they want to use that qualification of ‘young’ to water down your potency,” he said.
“Now, you see people go about saying, ‘I am a young professional, I am a young influencer, I am a young pastor, I am a young imam, I am a young photographer, leader, politician’.
“Who says you are? An influencer is an influencer, a pastor is a pastor… irrespective. Don’t bring yourself under the bondage that I am young or too young. You are not.”
He may be just 27, but Fakorede is a commissioner, and not just a young commissioner. You can watch an excerpt of his TEDxUI talk here.

‘HE MET SEYI MAKINDE ON LINKEDIN’ First Chat with Seyi Makinde
According to Japhet Omojuwa, Seun Fakorede met his new principal on social media about 15 months ago, and volunteered his services.
“See how to use social media. Seun Fakorede actually reached out to Seyi Makinde on social media March 2018! Think about it. This is not some godfather setup. Dude offered to be a VOLUNTEER then proved himself worthy! Learn,” Omojuwa tweeted.
He is a strong believer in the use of social and traditional media, Seun believes young people must learn from the old and infuse new ideas in challenging agelong dwarfing ideas.

FAKOREDE HAS THIS IN COMMON WITH SOYINKA, EKWENSI 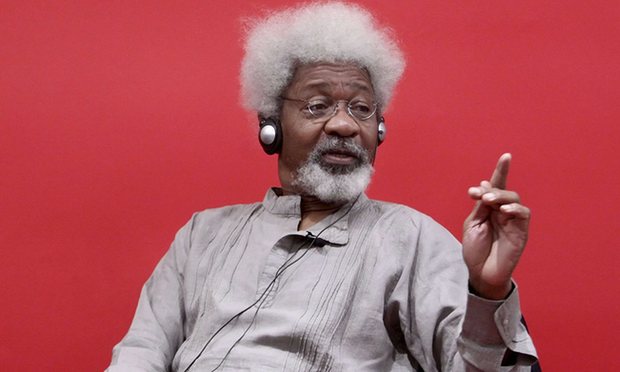 Soyinka also attended Government College Apata
Men do not just appear, they are made in the secret crevices of schools and colleges across the world. For Fakorede, the story is no different. Before Obafemi Awolowo University, he attended Alayande School of Science and Government College, Apata Ibadan.
He joins a long list of influencers who have come through Government College Ibadan, popularly known as GCI. Some of who include; Nobel laureate Wole Soyinka; Cyprian Ekwensi, renowned author of The Drummer Boy; Omololu Olunloyo, former governor of Oyo state; Akinola Aguda, first chief justice of Botswana; Christopher Kolade, former Nigerian ambassador to the UK; Bisade Ologunde, better known asLagbaja.
Like many of these giants, Fakorede is also a believer in the “African Dream”.  In a recent interview, he expressed optimism in the possibility of African millennials making historical impact in the not so far future.
“I believe more African Millennials are going to lead tremendous impact in the next few years of human history than ever before, your responsibility is to be one of them, and my responsibility is to raise more men to lead this vanguard,” Fakorede said.
“My passion and work has promoted leadership development and accountability for Millennials as critical indices to Africa’s development through seminars, conferences and other platforms.”
As part of the demonstration of his belief in Africa, in 2015, he founded Home Advantage Africa (HAA), “a non-profit devoted to promoting local dominance and globalstardom in Africa through digital storytelling and other projects of similar ilk.”

FAKOREDE: WITH GOD AND GOOGLE, YOU CAN’T FAIL 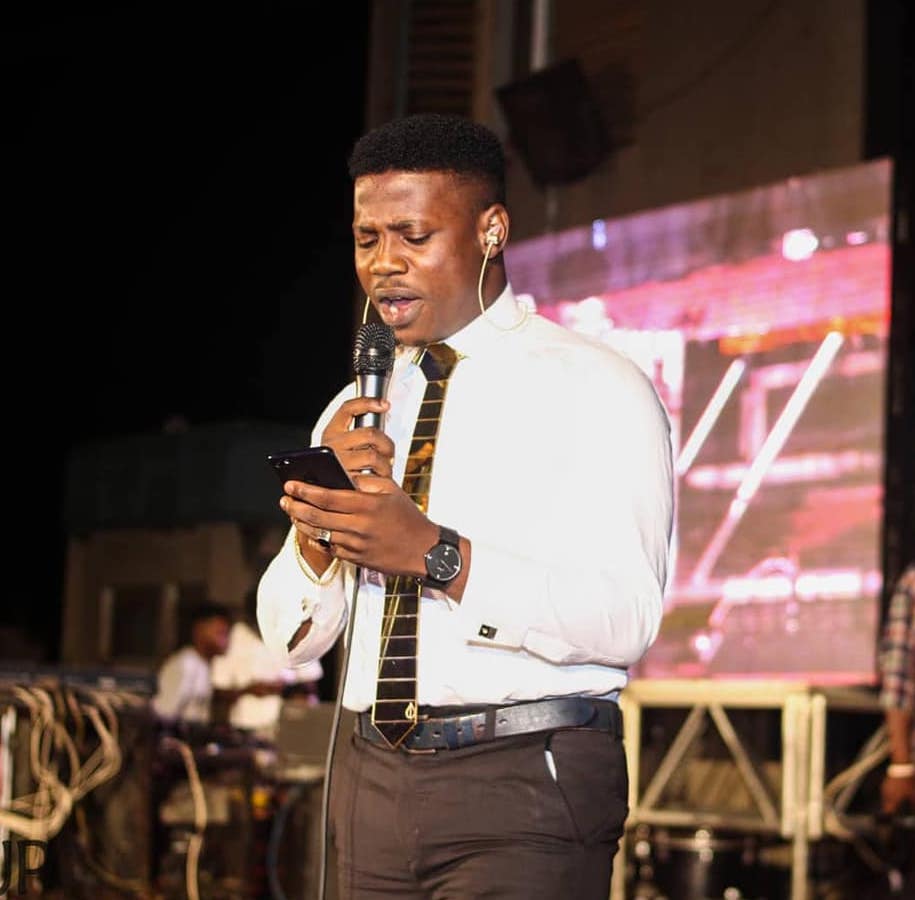 Fakorede is eccentric in many ways.
He believes that everyone needs two ‘Gs’ in their life to succeed — God and Google.
“Revelation and information are fundamental to living an enviable life. Revelation by God help you unravel mysteries, while information via Google keeps you abreast,” he says.
“It is practically impossible for you to fail if you maximise your relationship with God and your interaction with Google”.
As far as careers go, Fakorede is an engineer, entrepreneur, consultant, and author. He served as the supervising engineer in the Lagos State Development And Property Corporation (LSPDC) between December 2017 and November 2018.
“As a proactive, seasoned and dedicated professional with 7+ years of experience providing comprehensive administrative, operational and managerial support to various organisations — my expertise lies in coordinating and leading administrative and operational functions for senior-level personnels and executives,” he said.
“Backed by exceptional communication and multitasking capabilities, I excel at providing remarkable organizational skills and driving optimal efficiency and success,” he had said.
“I enjoy focusing on topics of Sustainable Development and Leadership that result in national socio-economic transformation, with an incorruptible passion for Youth Empowerment, Good Governance and Nation Building.”

THIS IS THE SEUN FAKOREDE 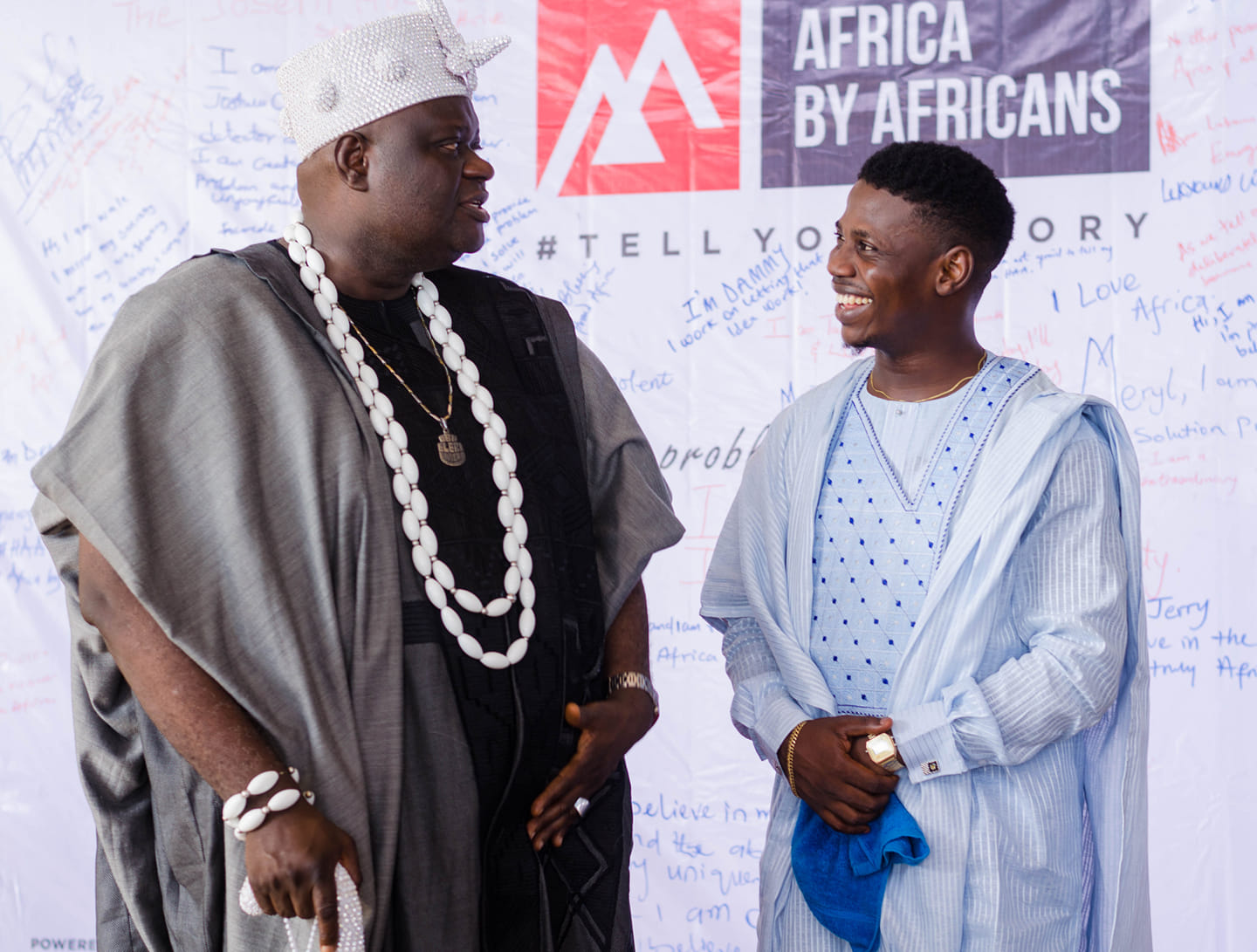 Standing before kings — literally. Fakorede and Elerinmo Of Erinmo-Ijesha, Michael Odunayo Ajayi, Arowotawaya II.
Fakorede carved a niche for himself, differentiating himself from his peers when he said in an interview that, “I am “theseunfakorede”.
“There could be other Seun Fakoredes but I am the definite SeunFakorede… I am theseunfakorede and everything I do is inside that brand, that wholeness.
“I am not a public speaker, yet I speak because public speaking for me is not a career, I do not make money from it. Truth is if you do something that has value whether you like it or not, people will call you to speak and share ideas on that value. That is just one of the ways I express my gifting and the values I have to bless people.”
Asked what his advice is for young people, Fakorede said, “over the years, I’ve seen a number of young people with great dreams and misplaced priorities and ambitions — most of them want to start all big and get to the top the same day they started. So my admonition is this, “nobody ever started at the finish line — don’t let the fear of being seen starting at the bottom stop you.”
“Seun is probably one of the most dedicated and self-driven achievers I have ever met. I’m privileged to know him and to have worked with him in many capacities. He is one that exudes energy, creativity and gives me the loyalty required of a subordinate. I enjoyed working with him, I’d definitely love the opportunity to work with him again. He does challenge you to high-level crisp leadership, I recommend him as a skillful person and a sound person with wholesome character.” Those are the words of Steve Araba, innovation accelerator programme specialist, on the recommendation section of Fakorede’s LinkedIn account.
ADVERTISEMENT
Via a social media post in August 2018, Fakorede said: “Our time has finally come! Let us rescue Nigeria from those who see her as their personal estate. Now is time and you’d better stop telling yourself it can’t be done.”
The Seun Fakorede’s time has finally come!