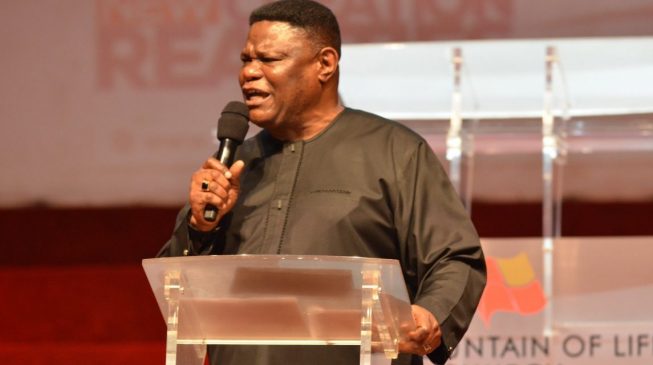 Mike Okonkwo, presiding bishop of The Redeemed Evangelical Mission (TREM), says traditional rulers and governors should be held responsible for kidnappings.
According to TheCable, Okonkwo, who spoke to journalists in Abuja after a sermon at summit, said the traditional rulers know their geographical space better and should be able to fish out the perpetrators.
ADVERTISEMENT
He argued that any traditional ruler whose territory records incessant cases of kidnapping should be suspended, asking governors to stop “crying to the presidency” over these problems.
The cleric asked governors to use security votes for what they are meant for.
“The people perpetrating kidnapping and other forms of violence did not drop from the sky; they came from somewhere. They are living in the same community where they do these things,” Okonkwo said.
“I have spoken with some traditional rulers that these things that are happening. As far as I am concerned, if somebody comes to my town or a state where I am operating and begins to kill people indiscriminately, then I will suspend the traditional ruler.
“How can that happen? I am in charge of a place and the traditional ruler of a town and such incidents like kidnapping happen in my town. You mean I cannot do something to find out where they are coming from? Where are they and where are they hibernating?
“They shoot people in the highway and run back into the bush in a state where somebody is a governor. We have had cases where some culprits were arrested. Governors and traditional rulers should own these problems and not be crying. Every day, they are crying; I am tired of their crying, they should do something as leaders.
“The President is not in a place like Enugu; why should I be the governor of a state and be looking at the Presidency to come and handle my state for me when I have security votes? The menace of kidnapping is staring every Nigerian in the face. I have always said something concerning this country. When problems of Nigeria are handled from religious, tribal, political or personal sentiments, we miss the whole point.”
ADVERTISEMENT
On Saturday, Bello Matawalle, governor of Zamfara state, approved the dethronementof Abubakar Cika, emir of Maru, over the monarch’s alleged involvement in banditry.