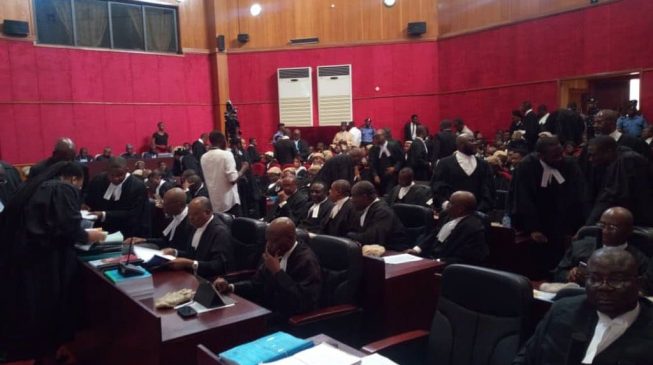 The presidential election petitions tribunal has reserved judgement in the petition the Peoples Democratic Party (PDP) filed to challenge the victory of President Muhammadu Buhari in the general election.
TheCable reports that the five-man panel of the tribunal led by Mohammed Garba said judgement would be delivered on a date to be communicated to the parties.
ADVERTISEMENT
Garba made the announcement after the petitioners and respondents – Independent National Electoral Commission (INEC), Buhari and the All Progressives Congress (APC) – adopted their final written addresses.
The PDP has asked the tribunal to declare Atiku Abubakar, its presidential candidate, winner of the election which held on February 23.
Citing a server of the electoral commission, Atiku claimed that he defeated Buhari at the polls by over a million votes.
Levi Uzoukwu, who led the petitioners’ legal team insisted in his final written address that Buhari’s claim that he submitted his certificates to the military board had been discovered false.
Lawyers to INEC, Buhari and the All Progressives Congress, however, urged the tribunal to dismiss the petition with substantial cost for lacking in merit and substance.
ADVERTISEMENT
They argued that the nation’s law only requires a candidate to be educated up to secondary school level or its equivalent.