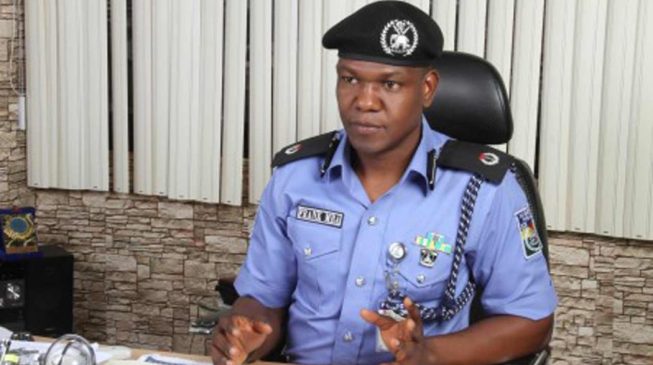 The Nigeria police force has described the ‘Revolution Now’ movement as an act of treason and terrorism.
In a statement on Saturday, Frank Mba (pictured), police spokesman, said the movement is a “revolution march against the Government of the Federal Republic of Nigeria”.
ADVERTISEMENT
TheCable reports that he warned citizens to desist from joining the planned protest, adding that its sole aim is to “force a regime change in the country”.
“The Force wishes to state unequivocally that the call amounts to treasonable felony and acts of terrorism and will therefore not stand idly by and watch any individual or group in the society cause anarchy in the land,” Mba said in the statement.
“While acknowledging the rights of Nigerians to embark on protest, the Force wishes to note that such rights should not translate to a violent and forceful change of government which clearly is the meaning of ‘revolution’.
“Needless to state that Nigeria is a democratic republic and has well-defined processes for change of government, exercised periodically during various cycle of elections.
“The Force therefore warns the organizers, sponsors, allies, supporters, associates and sympathizers of the group ‘Global Coalition for Security and Democracy in Nigeria’ to, in their own interest, steer clear of any such planned protest, demonstration, acts of incitement and proposed ‘revolution’, as the full wrath of the law will be brought to bear on any individual or group engaged or found participating in the above planned criminal act.”
According to organisers, the ‘Revolution Now’ movement aims to protest “bad governance” in Nigeria.
The movement, spearheaded by a number of activists in the country, has scheduled a nationwide protest from Monday.
ADVERTISEMENT
One of its leaders. Omoyele Sowore who was the presidential candidate of the African Action Congress (AAC) in the just concluded elections, was arrested in the early hours of Saturday.