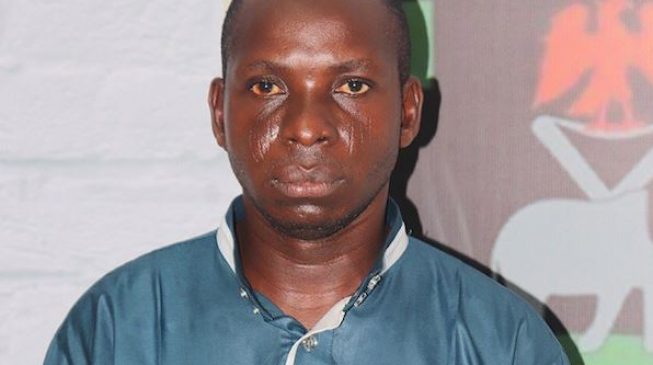 Hamisu Bala, suspected kidnap kingpin better known as Wadume, has alleged that the All Progressives Congress (APC) gave him N13 million for the February 23 presidential election.
He also reportedly said he defrauded some politicians, including Darius Ishaku, governor of Taraba state, who allegedly gave him N6 million.
ADVERTISEMENT
Ishaku is a member of the Peoples Democratic Party (PDP).
According to New Telegraph, Wadume said this while confessing to the detectives interrogating him.
The suspect was arrested by the intelligence response team (IRT) of the inspector-general of police but escaped when soldiers opened fire on the team and killed three policemen and a civilian.
He was later rearrested by the police in Kano.
Culled from TheCable, Wadume, however, did not give details of what the money allegedly paid to him by the ruling party was for.
Wadume explained that he made politicians believe that he possessed spiritual powers that he could use to make them win elections.
“I went into crime after some politicians approached me through a friend, Babaginda Musa. My friend was into fishing too. I was introduced into politics by Honourable Haruna Maintable, who contested for the state house of assembly during the 2015 general elections,” Wadume said.
“He gave me vehicle and I campaigned for him. He won and later gave me N300, 000 and the vehicle we used in the campaign.
“I was also given N13 million by the All Progressives Congress (APC) to pursue the 2019 presidential election. I spent only N7 million.”
Wadume added he contested the Taraba state house of assembly election on the platform of the Young Democratic Party (YDP) but “pulled out of the election and took my supporters to support the People’s Democratic Party (PDP).”
When TheCable contacted Lanre Issa-Onilu, APC spokesman, to react to the claim, he said he is not aware of any such transaction.
“I don’t know anything about that. When I have the full details, I’d know whether to respond or not.  I haven’t heard anything like that,” he said.
“And I also understand he is under investigation, so we should allow the police do their job.”
ADVERTISEMENT
Bala Dan Abu, spokesman of Taraba governor, said he could not confirm the suspect’s claim.
“I’d have to find out and get back to you,” he told TheCable over the telephone.