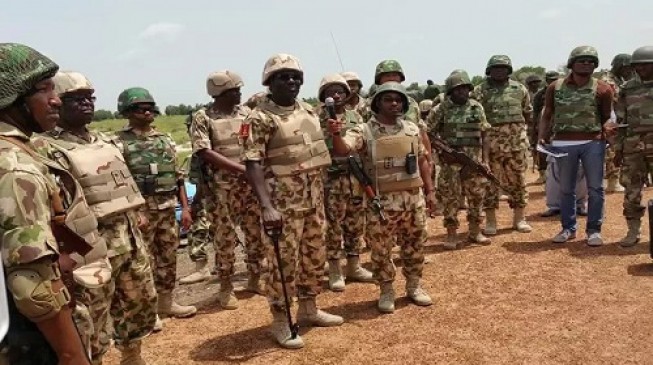 The Nigerian army has issued fresh directives to its personnel on how to handle the aftermath of the killing of three policemen by soldiers in Taraba state.
In a letter dated August 9 and signed on behalf of the chief of army staff by Felix Omoigui, a brigadier-general, the army asked its personnel to always be cautious in dealing with police officers.
ADVERTISEMENT
The policemen and a civilian were shot dead by soldiers at a checkpoint in the state. The policemen had arrested a kidnap suspect and were taking him along with them when the soldiers opened fire.
Sagir Musa, army spokesman, later said the soldiers mistook the officers for kidnappers, and that they were responding to a distress call on a purported kidnap incident within the area but the police dismissed his claim.
In the letter with reference number AHQDAIOPS/G3/240/232, the army accused the police of making “inciting and inflammatory” comments over the incident.
It warned of a possible escalation of the crisis and directed its personnel travelling on pass to be in mufti and to be circumspect in their conduct.
The letter read: “In the aftermath of the unfortunate incident involving troops of 93 bn, Takum and members of the Intelligence Response Team of the NPF at Ibi LGA of Taraba State on August 6, 2019, inciting and inflammatory comments are being made by the NPF on the regular and social media platforms.
ADVERTISEMENT
“This is capable of inciting the rank and file of the NP to exhibit aggressive tendencies against NA personnel. Accordingly, all troops on IS (Internal Security) duty as well as personnel travelling in and out of uniform are to be circumspect in their conduct to avoid escalation.
“Consequently, formations and unit commanders are to educate troops to be cautious in their dealings with members of the NP in view of this development. Troops travelling on pass are to endeavor to do so in mufti.”