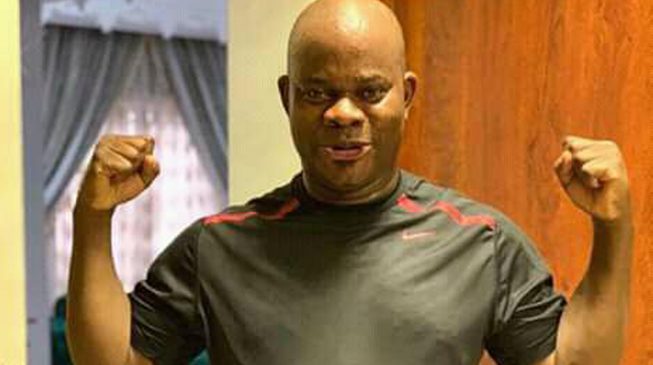 Simon Achuba, the deputy governor of Kogi state, may be counting his last days in office. The house of assembly has commenced impeachment proceedings against him while the All Progressives Congress (APC) has suspended him — predictably for “anti-party” activities, the standard accusation in political witch-hunts.
TheCable reports that Achuba is not alone in the “crush to conquer” strategy of Yahaya Bello, the governor of the north-central state, who sees himself more as an “emperor”, according to government insiders. Not long ago, Nasir Ajana, the chief judge of the state, came under heavy shelling from Bello who wanted him removed for, allegedly, not kowtowing to him. Predictably, the house of assembly recommended that Ajana should be suspended for “gross misconduct” — but the National Judicial Council does not appear to have received the memo yet.
ADVERTISEMENT
The loud whispers across Kogi state is that Bello, who at 44 is Nigeria’s youngest governor, has turned the state into his personal property and anybody who does not worship him will be cowed to submission by any means necessary. 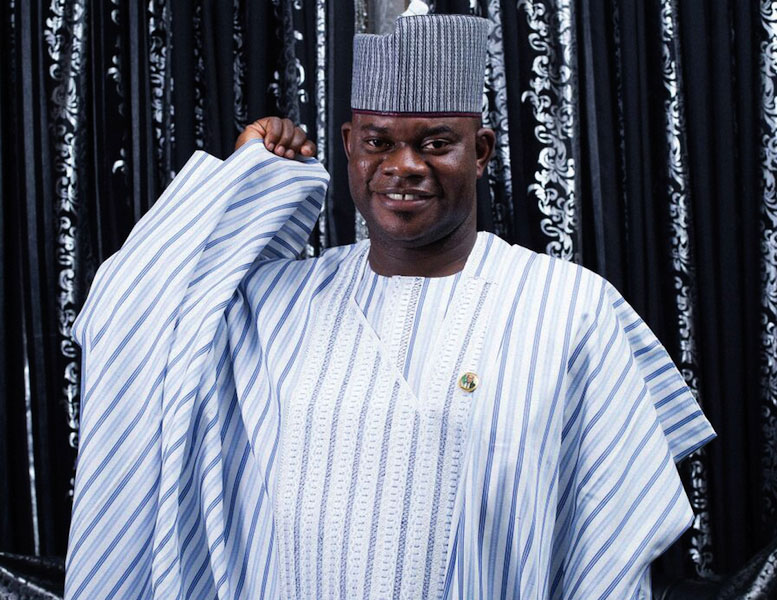 The unquestionable Bello, Nigeria’s youngest governor
It is generally believed that Bello inherited a dying economy from his predecessor, Idris Wada, but insiders say he has succeeded in administering drugs that kill the patient along with the disease.
Before the N30.8 billion bail-out he received from the federal government in July, which his critics said was meant to help him win re-election in November, Kogi workers had not been paid for over two years. Pensioners and retirees are still owed. Dearth of infrastructure is an aching reality. That businesses are folding up in the state is no longer treated as news.
But the most tragic effect of Bello’s misrule is the destruction of all state institutions. When he came in, he did not hide the fact that he had no respect for institutions — insiders tell TheCable.
“It was obvious from his style of administration as he weakened all the institutions he inherited in order to manipulate them. He created new institutions in order to undermine the existing ones as it became evident in his elevation of the office of chief of staff even far above that of the office of the governor. That is deliberate, intentional, and tendentious,” an appointee of the governor told TheCable.
At inception, Achuba was brought in as deputy governor to add credibility and endorsement to the government after the election chaos following the death of Audu Abubakar, who was set to become governor. Achuba, an Igala like Audu, tried to maintain his independence — which is called “disloyalty” in political circles. With such “audacious” act from him, all efforts were made to reduce him to size but the office was badly affected in the process. In most public functions, the deputy governor would be ignored and his presence unacknowledged. At a point, the electricity and water supplies to his residence were disconnected while his salary was stopped.
He recently cried out that his entitlements of up to N800 million had been denied him, raising the alarm that there was a plot to kill him. Officials of the Bello administration have issued a strong denial on the assassination allegation, describing the allegation as “bogus and an exhibition of a blind rage by an angry suckling with a long-term pattern of abnormal behavior”. 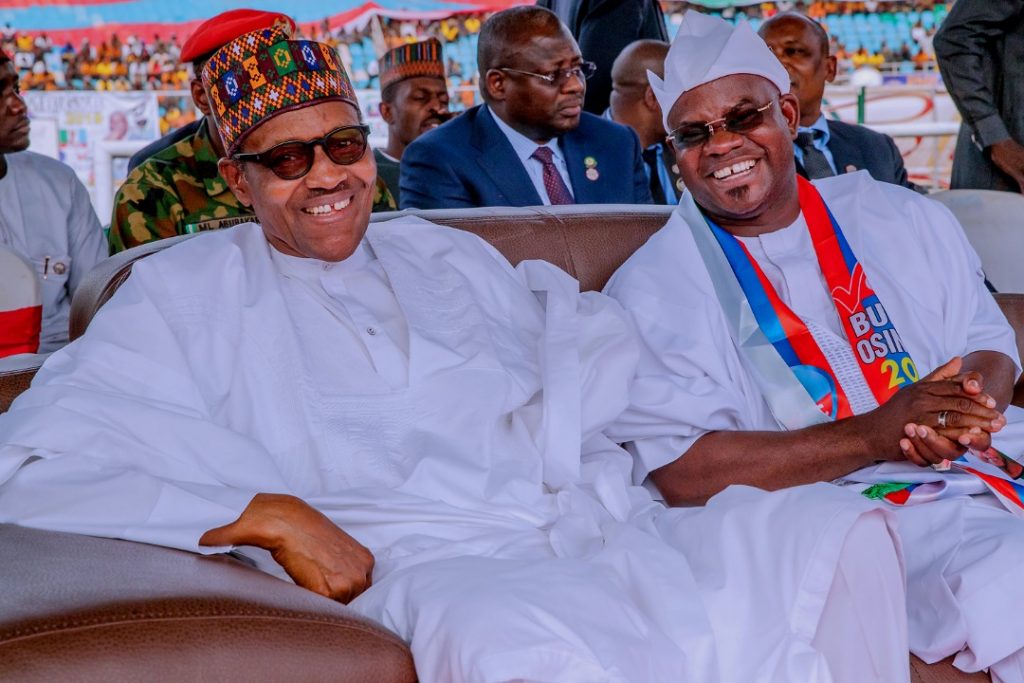 Bello is perceived to be close to Buhari, who recently approved N30.8 billion bailout for Kogi state
The efforts to completely destroy the legislative arm were hatched and perfected in the early days of the Bello government, according to insiders. The speaker was from Kogi central and Bello had a meeting with the house of assembly to effect a change because, according to him, it was not proper for both the governor and the speaker to come from the same constituency. It was a reasonable observation but the meeting ended in fiasco because the governor wanted a new speaker to come from the APC, the party that was then in the minority. And because the PDP members in the house insisted that things must be done properly, they were battered, harassed and their salaries were stopped for months while many of them had to run to Abuja for safety.
“The final outcome of the Bello style of leadership is the peculiar house of assembly that has been created for the state by the government. The type of house of assembly in Kogi state is a disgrace to democracy,” an insider told TheCable, while listing a series of other actions that weakened government institutions.
“The judiciary which ordinary should be the last hope of the masses has been castrated. Ordinarily, the commissioner for justice is competent and a core professional but he has watched helplessly as Bello destroyed the institution, making it the worst hit by the ravaging storm of the state. Deliberately, workers in the state’s judiciary are being owed over nine months’ salary.
“The ministry of lands has been reduced to a bureau just to make some peculiar interests to be accommodated. Waste management board, a parastatal under the ministry of environment, has been destroyed and incapacitated simply because the function has been taken away and instead given to a company known as Geemony, owned by a government insider.
“In the same manner, Kogi State Forestry has been given to individuals to manage, instead of the ministry of agriculture, though it has yet to be effected by law. At the moment, the amount being used to clean the government house and commissioners quarters by the commissioner of finance, Asiru Asiwaju, is higher than the budget of the ministry of environment.
“The local government as a third tier does not exist in Kogi state. Bello manages the local governments as if it is a unit under the ministry of local government. The councils no longer derive their powers from the constitution. For the past three and half years, government appointees have served as sole administrators in the 21 local government areas and are not empowered to administer the allocations. The traditional institution has also been destroyed by Bello. Traditional rulers have been reduced to mere domestic servants under Bello.” Onoja, Bello’s chief of staff, comes across as a co-governor
One of the first institutions Bello crushed was the ministry of information. With the intention of controlling information flow in the state, Edward Onoja, his chief of staff and Man Friday, was said to have installed certain appointees. But Abdulmalik Abdulkareem, an old and retired journalist from Kogi central — Bello’s home zone — who was made SA media to the governor, resisted Onoja’s control. He was subsequently removed and posted to the ministry of information, while Kingsley Fanwo, then chief press secretary, was given a position that never existed — DG, media and publicity. Fanwo was in Onoja’s good books.
Bello then changed ministry of information and culture into bureau of information services and grassroots mobilisation. Abdulmalik became the director-general instead of commissioner.
“Bello destroyed the information ministry but still wanted to accommodate the interest of his kinsman, Abdulmalik, whom the chief of staff had made sure was removed as SA media. Onoja initially wanted Abdulmalik to be sacked. But for him to be kept in the system, a whole ministry was sacrificed.
Another institution that was completely destroyed was the ministry of local government and chieftaincy affairs. There was a commissioner from Okene. But for Bello to accommodate the interest of his friend, Abubakar Ohere, also from Okene, he undermined the ministry by appointing Ohere as the SA in charge of the ministry.
ADVERTISEMENT
Though Ohere is an SA, he is more powerful than everybody else apart from the governor and the chief of staff, insiders said. Ohere is a member of the state’s executive council and has the most befitting accommodation at the commissioners quarters. Some commissioners live in two-bedroom flats in Lokoja. The commissioner of education lives in a two-bedroom apartment in Lokoja while SAs such as Ohere, Abdulmalik, Abdulkareem Onyekehi and others reside in the commissioners quarters.
It is the opinion of many of Bello’s critics that his government is being managed by misfits and incompetent hands. Aside the commissioners for justice, education, agriculture, and science and technology, the DG of private public partnership, the MD of Graphic Newspaper, SA new media and a few others, most of the appointees are said to be lacking in institutional competence.