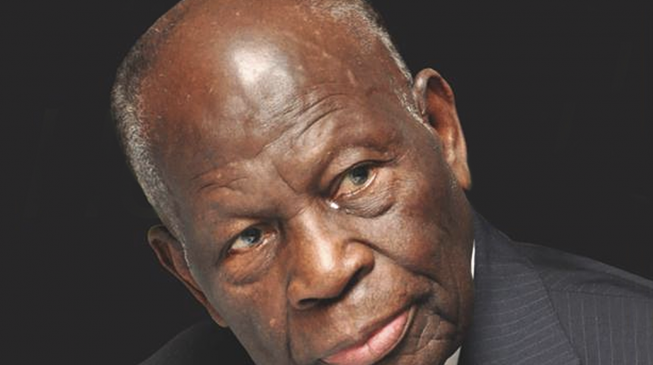 Not many live to see a century. In a clime where the mortality rate is one of the highest in the world, attaining such unusual pedestal comes with a collage of memories. For Akintola Williams, Africa’s first chartered accountant, it’s been a journey of landmarks. At 100 years of age, Williams has distinguished himself in many areas as a man worthy of being celebrated.
In Nigeria, life expectancy for men stands before 55 years of age — a record Williams beat nearly half a century ago. As a global citizen, he has also crossed the life expectancy for the leading countries in the world — Monaco, Japan, and Singapore with the enviable expectation of 89, 86, and 86.
ADVERTISEMENT
Williams is not just a man of years — but a man of landmarks. Call him the father of accounting in Nigeria, you will be spot on; refer to him as the god of music, you would not be said to be wrong; name him a pillar of business, you will still be speaking of the son of Williams who has become an enigma to difficult for death to handle.
Take a glimpse into the making of “The Accountant”:

Williams was born on August 9, 1919, into the family of Thomas Ekundayo Williams. He had his primary education at Olowogbowo Methodist Primary School, Lagos in the 1930s. From there, he attended the CMS Grammar School, Lagos, for his secondary education.
As a result of his academic brilliance, he won a UAC scholarship for his higher education at the Yaba Higher College where he obtained a diploma in commerce. He then proceeded to the University of London in 1944 to study banking and finance where he graduated with a bachelor of commerce degree in 1946.
He continued his studies and three years after, he qualified as a chartered accountant in England in 1949, making him the first African to achieve the feat. He was only 30.

Williams climbed the ladder of success with hard work and diligence. Armed with vast knowledge and interest, he returned to Nigeria in 1950 and served with the Inland Revenue as an assessment officer until March 1952 when he resigned to start his accounting firm, Akintola Williams and co., which became the first indigenous chartered accounting firm in Africa.
The firm grew to become a success with branches and partners in other African countries including Cameroon, Côte d’Ivoire, Swaziland, and affiliates in Ghana, Egypt, and Kenya. Between April 1999 and May 2004, Akintola Williams & Co. merged with two other accounting firms to create Akintola Williams Deloitte (now known as Deloitte & Touche), the largest professional services firm in Nigeria with nearly a thousand staff.
Willimas retired in 1983 at the age of 64 but didn’t rest on his oars to serve humanity. His track record as an ingenious accountant and a passionate being led him into mentoring and encouraging the development and growth of other indigenous chartered accountancy firms. 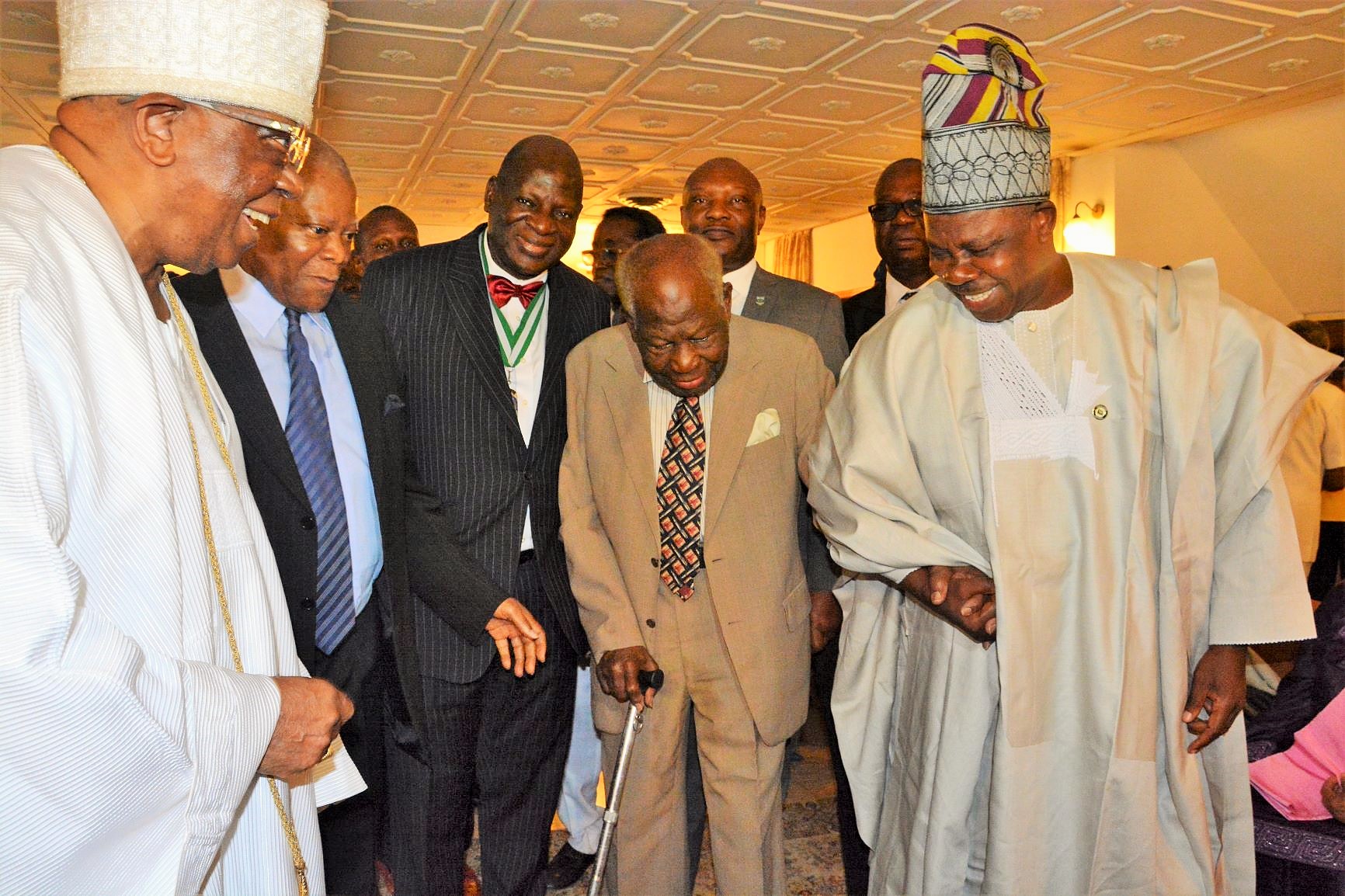 At his 99th birthday
As the drive to encourage indigenous ownership of businesses increased, Williams played a leading role in establishing the Association of Accountants in Nigeria in 1960, with the goal of training accountants.
He served as the first president of the association and also as the pioneer president of the Institute of Chartered Accountants of Nigeria (ICAN).
He was also involved in the establishment of the Nigerian Stock Exchange in 1960, a market that he is actively involved in till date as an adviser to the operators.
A pioneer and pacesetter, Williams laid the foundation for many institutions in Nigeria. He made his mark as a member and a former chairman of the Federal Income Tax Appeal Commissioners (1958–68); member of the Coker Commission of Inquiry into the Statutory Corporations of the former Western Region of Nigeria (1962); member of the board of trustees of the Commonwealth Foundation(1966–1975); former chairman of the Lagos state government revenue collection Pane; founding chairman, African Cancer Centre (ACC); founding member of the Nigeria Conservation Foundation (NCE); chairman of the Musical Society of Nigeria (MUSON); founding chairman of International Lions Club District 404, among others. 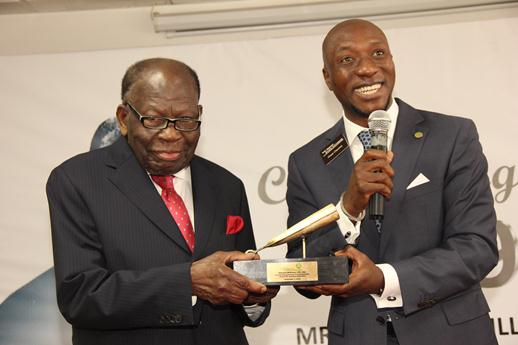 Williams was one of the founding fathers of the Nigerian Stock Exchange
Williams has garnered different awards and honours within and outside Nigeria as an appreciation for his hardwork, development of accountancy and contributions to the economic growth of Nigeria.
He was honoured by the Nigerian government with the Order of the Federal Republic (OFR) in 1982 and Commander of Federal Republic (CFR) in 2001.
On May 8, 2011, the Nigeria-Britain Association presented awards to Williams, alongside John Kufuor, ex-President of Ghana, for their contributions to democracy and development.
In April 1997, Williams was appointed as Commander of the Most Excellent Order of the British Empire for services to the accountancy profession and for promotion of arts, culture, and music through the Musical Society of Nigeria.
Williams was married to Efuntiloye Mabel Williams (nee Coker), who died in 2009 at the age of 88.
The marriage was blessed with two children, Williams and Seni.

‘I AND MY BROTHER ALWAYS TOOK FIRST’ 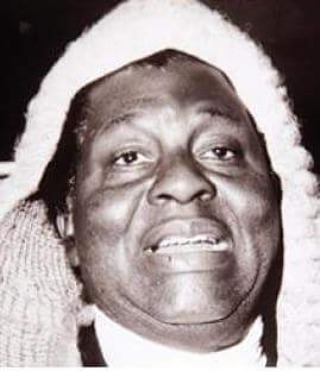 Rotimi Williams, brother to Akintola Williams was Nigeria’s first senior advocate (SAN)
The centenarian explained that a number of things, including having dedicated teachers and determination to succeed helped formed him into the giant he has become today.
“As you know, to train as a chartered accountant, you have to serve what was called articleship or apprenticeship and you couldn’t do that here; you had to go abroad,” he said in an interview.
“I was with a firm where the second senior partner was a great disciplinarian, just as I would say the same with regard to the principal of the CMS Grammar School that saw me finished at the school, John Lewis; he was a very rigid, strict to the rules and you dared not appear to be late.
“I would say a number of things made it possible for me. First, were masters in the favourite subjects which eventually was necessary for my profession in accountant, namely, mathematics.
“And Mr Adelaja used to take us in algebra, geometry and arithmetic. so in a way the fact that we were particularly lucky to have masters who were good in that subject also helped my decision to go in for accountancy.
“In those days we used to have weekly cards that indicated your progress in the school and I will perhaps be right in saying we were lucky that we had good masters. But the essential thing was that they were dedicated teachers; they knew their subjects and then we know alternatives since we had to show our weekly cards to show our parents at home, we had to study hard.
“I think I’m right in saying that right through the five years I spent, Rotimi (his brother) spent, we were deciding who would come first this week and the next and so it was a highly competitive decision and we did not regret it.”

WHEN A MAN BECOMES A NATION’S HISTORY 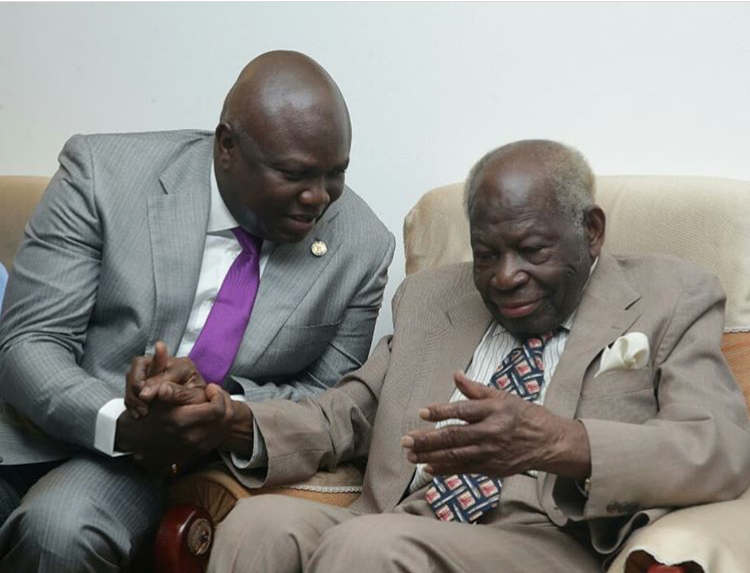 Akinwunmi Ambode, former Lagos governor, and Williams
During the celebration of his 99th birthday, Akinwunmi Ambode, former governor of Lagos state, and Ibikunle Amosun, former governor of Ogun state, commended the centenarian for his great contributions and patriotism towards the development of Lagos and Nigeria.
“We are here to celebrate a true Nigerian, for somebody to have actually contributed to the development of Nigeria and is still alive at 99, he is worth celebrating. It’s like a prelude to a centenary which we are waiting to celebrate next year,” Ambode had said.
“You can see that the Ogun state governor is here too, apart from the fact that he is a doyen in accountancy, we see him as a founding father of the history of chartered accountancy in Nigeria, so he has so many parts and this is something one has to be proud of and we are willing to celebrate him every day.”
ADVERTISEMENT
They don’t make them like Akintola anymore. From laying his founding bricks Olowogbowo to building his walls at CMS Grammar school, to amassing British education, to building what President Muhammadu Buhari refers to as “strong pillars of the Nigerian economy”, it is clear that Akintola is not just a man, but a being that has become a major chapter of accounting and business in Nigeria.
100 hearty cheers to an iconic centenarian!