We are all in darkness, says Obasanjo as he hosts Fulani leaders in Abeokuta 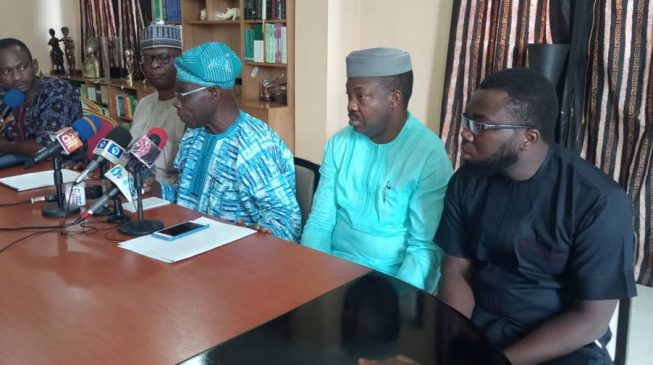 Former President Olusegun Obasanjo hosted leaders of the Gan-Allah Fulani Development Association of Nigeria (GAFDAN), an umbrella group for Fulani organisations, at the Olusegun Obasanjo Presidential Library (OOPL) in Abeokuta, Ogun state, on Saturday.
Yinka Odumakin, spokesman of Afenifere, Dayo Adewole, son of former minister of health who was recently kidnapped in Oyo state, were among those in attendance.
ADVERTISEMENT
Sale Bayari, GAFDAN national chairman, led delegates of the association, drawn from south-west states, Kogi and Kwara states to the meeting.
TheCable reports that Obasanjo said Adewole’s son was invited to the meeting to narrate his ordeal, adding that the essence of the meeting was to proffer a solution to the killings and kidnappings across the country.
“We are all in darkness, all of us, we are in the darkness. We need to be in the light. I want to learn from you; I hope you will learn from me too. And at the end of the meeting, we will be able to proffer solutions to the happenings in the region,” Obasanjo said.
Journalists were later asked to leave the venue of the meeting but a communique was issued hours later.
The communique said the ex-president conveyed the meeting as part of his efforts to understand and facilitate the mitigation of the insecurity and criminality that is pervading south-west states and Nigeria.
It said all the participants agreed that there was need to find a solution to the rising insecurity in the land.
“It is critical for us as a people to start talking to each other with a view to find the practical solutions to deal with the challenges. One of the problems worrying the society is the problem of cover-ups and denials by both community and public institutional leadership that ought to expose these problems and deal with them,” the communique read.
“Stigmatization and victimization of a group of people, in this case the Fulani is of grave concern. The Fulani have both good and bad people. The action of bad Fulani should not be taken against all the Fulani.
ADVERTISEMENT
“Fulani are also victims of kidnapping, banditry, cattle rustling and loss of property etc. There are other tribes who feel so in Yorubaland, and there are Yoruba who feel so in other geo-political regions of Nigeria. So the idea of moving tribal groups en masse from one geo political region to another is inpracticable and should not be talked about by leaders. g. We have to work as one community through our various efforts and responsibilities to protect and safeguard the interest of the community.”