Who do ‘Magu boys’ work for, EFCC or an emperor? 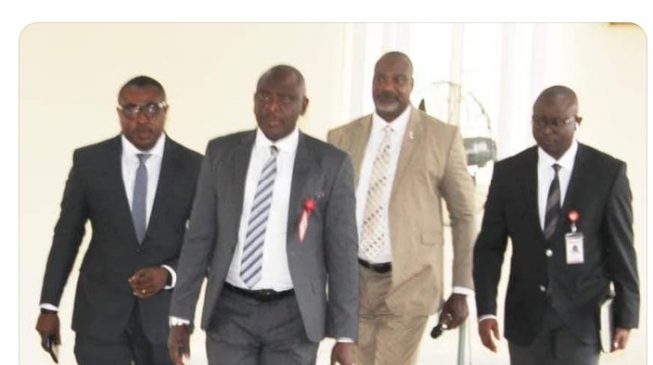 A scathing detraction to professionalism in Nigeria is the customisation of public offices. Institutions are built around personalities rather than on principles and service.
The corrugation of Nigeria’s public offices and institutions has a long history. But of significance is the brazen privatisation and deployment of public office to insular ends by Michael Aondooakaa, attorney-general of the federation (AGF) under Umaru Musa Yar’adua, in 2009.
ADVERTISEMENT
Aondooakaa was AGF and in the same breath, counsel to George Akume, then Benue state governor, who was being investigated by the EFCC for alleged corruption to the tune of N2 billion.
Being Nigeria’s chief law officer, Aondooakaa, who naturally should have recused himself from the case, went to work undermining and frustrating the EFCC.  In fact, prior to his appointment he had filed a suit at the supreme court seeking the dissolution of the anti-graft agency. And he refused to withdraw this case or his representation in the matter even after his appointment until the apex court dismissed it.
That was the standard-bearer of Nigeria’s law begriming the constitution. Earlier, in 2007, he attempted to retard the arrest of James Ibori in the UK – an action which led to a diplomatic scuffle with the country. Nuhu Ribadu’s unbending stance in this case, led to his mortifying discharge weeks after.
There are analogous cases in the Buhari administration –  one of which is the ‘’cleansing and empowerment’’ of Abulrasheed Maina, former pension chief, who was declared wanted by the EFCC for corruption, by Abubakar Malami, attorney-general of the federation.
I believe the office of attorney-general of the federation has been one of the most abused of all offices in the country.
In the same vein, the tagging of top staff of the EFCC as ‘Magu boys’ by the agency accents the execrable customisation of public office in the country. It is the reason the institutions function with human frailties; that is, if the head of an institution is incompetent or corrupt, the entire body necrotises.
This is the lamentable piece of hagiography the agency footnoted in a photo on social media.
‘’#Photo Magu Boys, led by EFCC’s Lagos Head of Operations, Mohammed Rabo, on the move as they continue to tame the corruption monster from the Lagos axis of the battlefield. With the acting Chairman, Ibrahim Magu, giving orders and directing affairs, the war is winnable.”
The reluctance of public officers to distinguish themselves from their offices is the reason abuse of office is rife here. There is Ibrahim Magu and there is the EFCC. Two separate entities. Personal foibles and interest must be detached from public office.
If Magu leaves as EFCC chairman, will those agents still be ‘Magu boys’? Will they be working for him or the agency? Whose interest are they serving, Magu or Nigerians? And do they work for Magu or for Nigerians?
It is a downing reality how individuals expropriate public offices, design them in their own image and build a temple in them for everyone to worship.
A few days ago, after the inauguration of ministers, a herd of staff members of the ministry of finance abandoned duty and stayed out in the rain to welcome Zainab Ahmed. They formed a doughnut around the minister and chanted, ‘’mama oyoyo’’ as she sauntered into the premises with an insufferable gait. She soaked in all the praise and sycophancy.
But did the minister not realise that it was wrong of them, the jamboree being during work hours? And is there no regard for professionalism?
ADVERTISEMENT
Also, the privatisation of institutions like the police and the DSS, which are sometimes deployed in witch-hunt, is the reason their performance is underwhelming. Until public institutions truly become public; they cannot serve Nigerians.