Adoke: I opposed sovereign guarantee for Azura — and I’ve been proved right 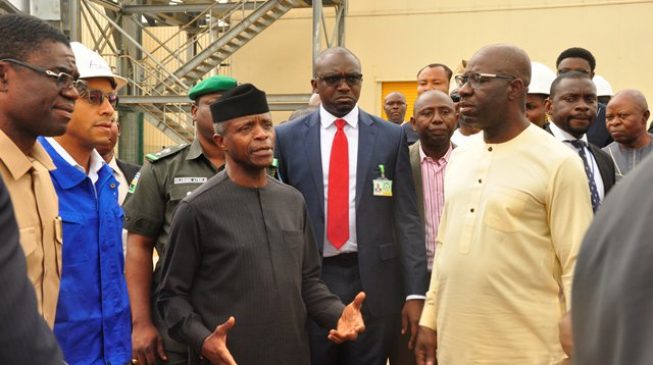 Nigeria should not have issued a sovereign guarantee that allowed a private company, Azura Power, access World Bank loan because it broke a standing rule, a former attorney-general of the federation has said.
In his memoirs, “Burden of Service: The Reminiscences of Nigeria’s Former Attorney-General”, Adoke said the decision not to give guarantees on behalf of private companies was taken by the Goodluck Jonathan administration because of the risk to the country’s assets abroad resulting from defaults.
ADVERTISEMENT
He said the foreign assets of the Central Bank of Nigeria (CBN), Nigerian National Petroleum Corporation (NNPC) and National Sovereign Wealth Investment Authority (NSIA) were already at risk.
However, Azura-Edo Power got the sovereign guarantee when Jonathan left office.
Nigeria has now been placed under certain monthly obligations that of it fails to meet, the partial risk guarantee (PRG) might be activated.
Babatunde Fashola, as minister of power, would later raise concerns over the PRG and said the federal government was no longer keen on giving such guarantees any longer.
‘FG IS VULNERABLE’
Azura is an independent power plant in Edo state with plans to generate 461MW of electricity.
It is a private company in which the Edo state government holds a minority stake, based on the 100 hectares of land it allocated to the company.
Adoke wrote: “The Federal Government of Nigeria had become susceptible to incurring huge judgment debts from Sovereign Guarantees made in favour of states and private enterprises. Learning its lesson from the losses, the FEC resolved that no further Sovereign Guarantees were to be issued by the Federal Government in favour of private entities. In August 2014, the SGF issued a circular directing that a ‘specimen indemnity’ clause be inserted into all contracts and agreements entered into by the Federal Government with foreign entities. That was to provide additional protection to the Federal Government of Nigeria and some of its separate legal entities, such as the CBN, NNPC and NSIA, whose assets would be liable to attachment in enforcement proceedings in foreign jurisdictions.
“The Azura-Edo Power issue came up on the heels of this government’s position and in the same year the circular was issued… Azura wanted to secure foreign loans for the project, so Dr Okonjo-Iweala sought my legal opinion on the Put-Call Option Agreement (PCOA), which included the Partial Risk Guarantee (PRG) signed with Azura Power. I reminded her of SGF’s circular on the need to indemnify the Federal Government and prevent its assets from becoming vulnerable in the event of a default.
“I came under serious pressure from Dr Okonjo-Iweala and the Minister of Power, Prof Chinedu Nebo, as well as some other influential Nigerians, on the matter. By January 2015, Prof Nebo wrote a memo to the President seeking a waiver for the Azura project with regards to the circular. He made assurances that all obstacles had been overcome but for the legal opinion from the AGF. The memo was written in a way to make me look like the public enemy. He said inserting the “specimen indemnity” clause would prevent Azura from drawing down on any of the loan agreements that it had signed with a lender group. He cited the involvement of World Bank as evidence that the government should accept to issue Sovereign Guarantee.
“I drew attention to the FEC resolution that approved the ‘specimen indemnity’ clause and cautioned on the need to reverse that decision before any action could be taken on Azura’s request. I, therefore, advised Okonjo-Iweala and Nebo to present another memo to FEC seeking a review or a waiver. My belief was that such a memo would be favourably considered if they were able to provide justification or exceptional reasons in support of the request. But nobody wanted to take that risk.
“Unfair insinuations were made against me – all water off a duck’s back. I stood with what was right in the circumstance. Regrettably, as soon as we left office, some people who claimed they had influence in government took advantage of the absence of an Attorney-General, months into the administration of President Buhari. They reached out to Vice-President Osinbajo, who got the Solicitor-General to issue the Sovereign Guarantee. I would have thought the Solicitor-General, having been part of the team that saw the loopholes from all the foregone conversations, would act differently. But he was a civil servant, after all. The Federal Government then signed off its backing of a $237 million World Bank PRG for the construction of the Azura-Edo IPP.
ADVERTISEMENT
“Unfortunately, the Azura Project became an albatross around the neck of the Federal Government because of the ill-advised Sovereign Guarantee. Mr Babatunde Fashola, the Minister of Power under President Buhari, would eventually declare that the Federal Government was no longer keen on providing Sovereign Guarantees to investors interested in building new power plants because of the Azura experience.10 A part of me felt vindicated. We did many things in office that were derided and criticised, but it is a little gratifying that our critics later came round to our position!”