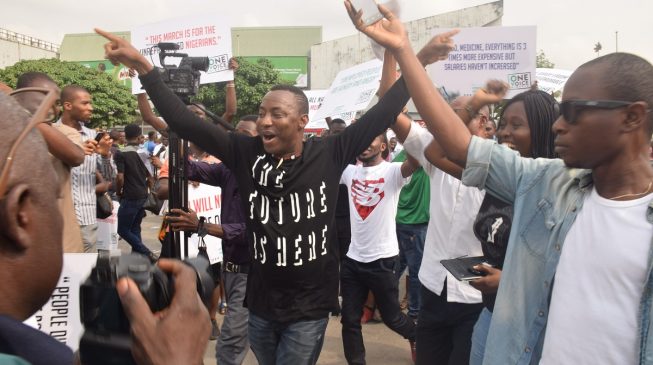 A federal high court in Abuja has granted Omoyele Sowore, convener of #RevolutionNow, bail.
The court ordered his release to Femi Falana, his counsel, and asked that he deposit his international passport with the court registry within 48 hours.
ADVERTISEMENT
While delivering a ruling on Tuesday, Taiwo Taiwo, the judge, said there was no longer a subsisting order holding the SaharaReporters publisher in detention.
During the proceedings, G Agbadua, counsel to the DSS, argued against releasing Sowore on bail.
The lawyer said the charges against the SaharaReporters publisher “are a capital offence punishable by death” and that granting bail should be done “under exceptional circumstances”.
“Interestingly, the learned silk said the respondent have been charged to court for treason and treasonable felony,” he said.
“My lord, the offence is a capital offence and by the provision of the ACJA section 161, it is an offence that is punishable by death – granting bail (is done) under exceptional circumstances.
“It is our submission, that for the interest of justice and national security, this court make an order that bail or otherwise of the respondent be determined by the court.”
But Falana, Sowore’s lawyer, said the DSS lawyer was misleading the court by saying that treasonable felony is a capital offence.
Citing MKO Abiola versus FRN 1995, Falana argued that the then presidential candidate was granted bail after he was charged with treasonable felony.
“He cannot urge your lordship to further a citizen in anticipation of arraignment. By virtue of section 40 of terrorism prevention act, the SSS is not empowered to detain anyone,” the counsel said.
“Section 1 of the national securities act created the SSS and not the DSS.”
Falana added that since the order allowing the DSS to hold Sowore for 45 days had expired, the defendant should be released on bail.
ADVERTISEMENT
The court upheld the argument of the senior advocate and ordered Sowore’s release.
Sowore has been in detention since August 2.

Editor’s note: The picture in this report is only for illustrative purposes.