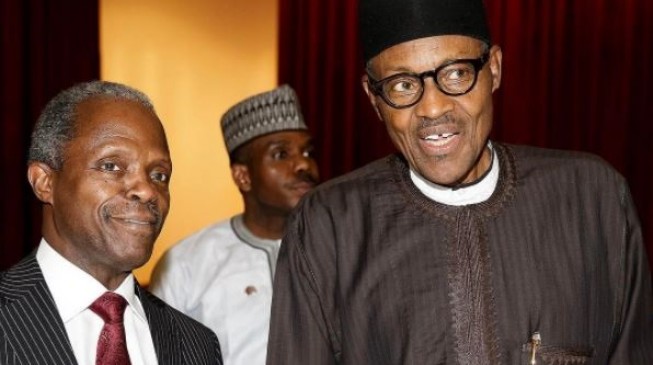 Vice-President Yemi Osinbajo says the All Progressives Congress (APC) will lift 10 million Nigerians out of poverty in the next 10 years.
According to NAN, Osinbajo spoke at Birnin Kebbi in Kebbi state when he paid a courtesy visit to Muhammadu Bashar, emir of Gwandu.
ADVERTISEMENT
“President Muhammadu Buhari has promised to take 10 millions Nigerians out of poverty in the next 10 years, we can believe very strongly that we can achieve it with the collaboration with the state governors, ” he said.
Osinbajo’s statement contradicts Buhari’s promise in his Democracy Day speech. The president had said 100 million Nigerians could be lifted out of poverty in 10 years.
The vice-president said he was in the state to promote petty trading, which according to him, could alleviate the level of poverty in the country.
According to Osinbajo, the national micro and medium enterprises scheme is a scheme that is designed to develop the business of petty traders.
“We are here in Kebbi for several things and to promote national micro, small and medium enterprises and petty traders business, and to inspect the renovation of market in the state,” Osinbajo said.
“We give petty traders N10,000, when they pay back we increase it to N20,000. This is very good program which is designed to help hard working citizens of this country; they should be able to have support from government no matter how little it is.”
He commended the traditional ruler for collaborating with security agencies in fighting insecurity in the state.
He also thanked Abubakar Bagudu, governor of Kebbi, for supporting trader groups across the 21 local government areas of the state and for giving N200 million loan to National Union of Road Transport Workers (NURTW).
”I’m so pleased to hear what NURTW has been doing in Kebbi; every ward has two drivers to take pregnant women to hospital and wait for one hour in the hospital and take them back home; they are rendering service to humanity,” he said.
Responding, Bashar congratulated Osinbajo and the president for their victory at the tribunal.
ADVERTISEMENT
He also thanked Osinbajo for promoting petty trading in Nigeria and urged Nigerians to unite, forget cultural and religious differences and embrace peace and development.