Atiku not from Cameroon, motion on vote-buying dismissed — 9 highlights from the tribunal 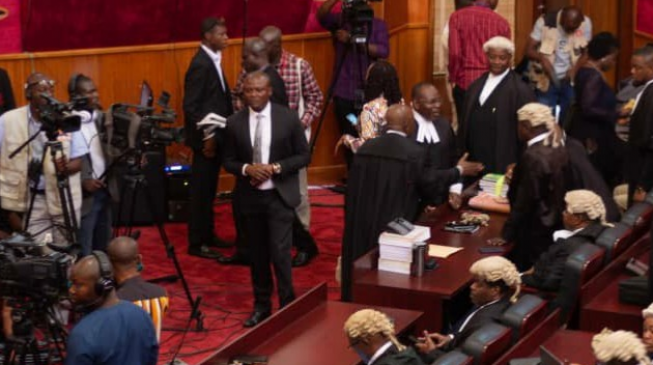 The presidential election petition tribunal has so far delivered at least nine rulings ahead of the final judgement on the petition challenging the outcome of the presidential election.
Before it went on a break at past 1pm, the tribunal sitting in Abuja dismissed a motion filed by the Independent National Electoral Commission (INEC) alleging that Livy Uzoukwu, lead counsel of Atiku Abubakar of the Peoples Democratic Party (PDP), is not a legal practitioner.
ADVERTISEMENT
The tribunal held that the claim is unfounded and that Uzoukwu was called to the Nigerian Bar, and was conferred on the title of senior advocate of Nigeria (SAN) in 1992.
The other rulings given so far are:
INEC’S CLAIM THAT OSINBAJO SHOULD HAVE BEEN JOINED IN THE SUIT DISMISSED
Citing section 178 of the 1999 constitution, the tribunal said there is no need for Osinbajo to be joined in the matter. “The vice-president was nominated by the presidential candidate,” the lead justice said.
INEC’S REQUEST TO STRIKE OUT SOME OF PDP’S WITNESSES DENIED
INEC had in another motion asked the tribunal to strike out some of the documents and witnesses brought forward by the PDP and Atiku. The court, however, refused this prayer.
ATIKU’S RIGHT TO PETITION AGAINST BUHARI’S VICTORY AFFIRMED
INEC had requested the tribunal to dismiss Atiku’s prayer seeking Buhari’s disqualification on the grounds that he was not qualified to contest the election, saying it is a pre-election matter.
The tribunal, however, held that the issue is not a pre-election matter, and that it is accepted based on the provisions of the electoral act 2010 as amended.
It ruled that section 138 (1)(a) of the electoral act allows for the filing of the petition relating to the allegation of false information.
CLAIMS THAT BUHARI INDUCED VOTERS WITH GOVT FUNDS DISMISSED
The tribunal also struck out some paragraphs of the petitions filed by the PDP and Atiku in which they accused Buhari, the second respondent, and Osinbajo of using government funds to induce voters.
It agreed with the submission of Buhari’s counsel that it has no jurisdiction over the matter and that the court lacks power to try those accused of using government funds for purposes they were not appropriated for.
ATIKU’S MOTION INDICTING SECURITY OPERATIVES DISMISSED
The tribunal dismissed parts of the application filed by the PDP and Atiku accusing the security agencies of rigging the election in favour of Buhari.
It upheld a submission submitted by INEC that the PDP and Atiku should have joined the security agencies in questions in the suit filed.
ATIKU QUALIFIED TO FILE THE PETITION
The tribunal also dismissed a contention by Buhari that Atiku was not qualified to file the petition challenging his election.
It ruled that the petitioners have every right to present their petitions to the court in line with the provisions of the electoral act 2010 as amended. It also said  there is no inconsistency in the petition as submitted by the PDP.
ATIKU’S ARGUMENT ON USE OF CARD READERS AFFIRMED
The tribunal ruled against the motion filed by Buhari, challenging Atiku’s argument on the non-use of the smart card reader and other electronic devices. It held that the use of card reader is a valid component of the electoral process.
ADVERTISEMENT
ATIKU’S CLAIM THAT THE APC ABUSED COURT PROCESS DISMISSED
The tribunal also dismissed the motion filed by the PDP and Atiku alleging abuse of court process, relating to an application filed by the APC, the third respondent.