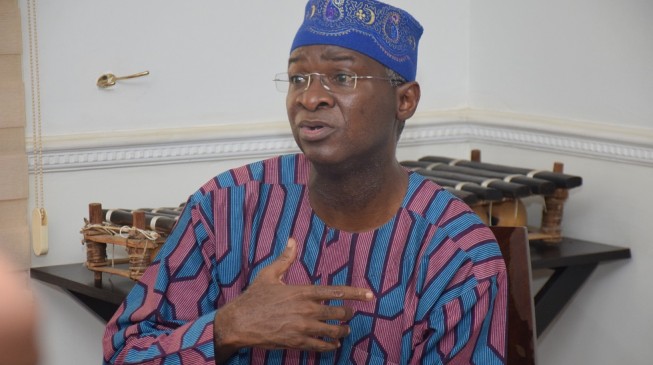 Babatunde Fashola, minister of works and housing, has described some of the critics of the federal government’s borrowings as “backward economists”.
In July, the Debt Management Office (DMO) released figures which showed that Nigeria’s debt increased by N560 billion in the first quarter of 2019.
ADVERTISEMENT
According to the DMO, the total debt stock as of March 31, 2019, stood at N24.9 trillion compared to the N24.3 trillion as of December 31, 2018.
The breakdown showed that the total external debt stood at N7.8 trillion ($25.6 billion) while domestic debt was N17 trillion ($55.6 billion).
But speaking during a meeting at the Lagos Business School (LBS), Fashola said some economists who could not run small businesses successfully had been harsh on the government for borrowing to finance infrastructure projects in the country.
“Today, the government is constructing roads in every state of Nigeria and while revenues are a challenge to prompt completion, some experts who have not successfully shown they can run a small business moan the loudest about Nigeria’s borrowing to fund infrastructure investment,” he said.
“A Nigerian has borrowed billions of dollars to build a refinery, petrochemical plant, fertiliser plant and gas processing plant, yet some backyard economists complain that a country whose population is in the hundreds of millions is borrowing too much to fix rail, roads, ports (air and sea) and power.
“They come to the public space to talk about the GDP (Gross Domestic Product) and infrastructure of the United States and OECD (Organisation of Economic Cooperation and Development) countries. But they are ominously silent on America’s public debt that exceeds $21 trillion.”
He said a lot of Nigerians go on holidays to places like the US for medical treatment, seek for their citizenship, fly their airplanes and use their airports but unknowingly pay in part for the debt these countries have incurred for building the infrastructure they enjoy.
He challenged business students at the LBS to seize the public space from “those half-baked economists and enlighten the public about the necessity to invest before you can claim a dividend.”
He said federal roads such as the Lagos-Ibadan expressway, Apapa-Oworonshoki expressway, Ikorodu-Sagamu and Lagos-Badagry were built about four decades ago and have outlived their design lives.
“What we now hear is the inconvenience, instead of the acknowledgement that government is now responding and providing the service we all craved for almost two decades,” he said.
“Please be aware that all those roads under construction are now construction sites and, in the world that we now live in, safety on construction sites is now a big issue.
“Not only for motorists who have to drive through them but also for our brothers and sisters who are working there to deliver the infrastructure we desperately crave. A camera sees only what the man behind the lens wants it to see. So, instead of inconvenience, I see service, with the hope that things will get better.”
On the widespread kidnappings, the minister said: “I make the point that this is not a novel crime in Nigeria.
“From when I was a child, we were reminded by our parents about the threats of kidnappers. So, what we have is a crime pattern that has come back to the front burner while cases of armed robbery at homes and banks seem to have taken a back burner.
“The question I urge all of us to ask is why has it come back? Is organised crime gathering more momentum? Is the presence of police in deterring bank robberies forcing organised criminals to re-think and re-strategize? Is the gradual reduction of cash at homes and on our persons, through greater use of bank cards and electronic wallets, making home attacks less rewarding and profitable?
“Simply put, are the criminals saying to us, if we cannot rob a bank or a home for cash, why not seize the owner of the cash (hostage taking) and get their people to bring the cash to us?
ADVERTISEMENT
“If this is the case, what are we doing or going to do about it? We should seriously consider and effect lifestyle changes that avoid obscene display of wealth which makes us vulnerable as potential victims.”