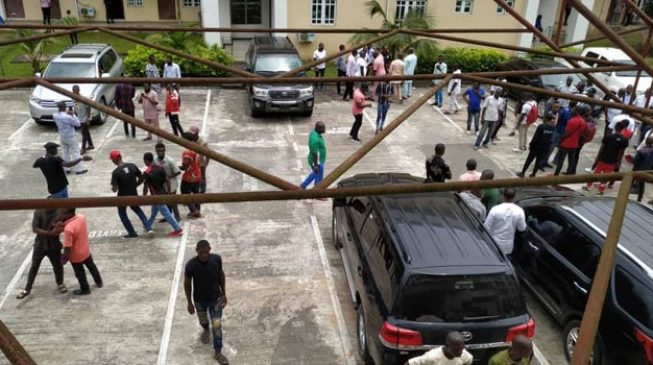 Tonye Isenah, speaker of the Bayelsa state house of assembly, has been removed.
Isenah was removed shortly after gunshots rocked the assembly over the crisis that broke out as a result of the refusal of Isenah to step down.
ADVERTISEMENT
Isenah had been under pressure to resign following the emergence of Douye Diri as gubernatorial candidate of the Peoples Democratic Party (PDP) for the November 16 election.
Isenah and Diri are from his Kolokuma-Opokuma local government area of the state, a development which some political pundits say could work against the PDP candidate in the election.
Trouble started on Monday after Isenah, who had told reporters on Friday that he would relinquish his position, adjourned plenary indefinitely.
Suspected thugs were said to have invaded the chamber after which the mace was forcefully taken away.
Some lawmakers later reconvened and took the decision on replacing Monday Obolo, the former majority leader of the house.
Obolo represents southern Ijaw constituency 2.
But Ranami Afagha, spokesman of Isenah, said the impeachment would not stand as it was done against the standing rules of the house.
ADVERTISEMENT
Afagha said the mace of the house was “violently taken away by thugs”, adding that since the symbol of authority was not in the house, activities of those who removed Isenah were illegal and unconstitutional.
Photo credit: Channels TV