Bill Gates: The most surprising thing to me about Dangote 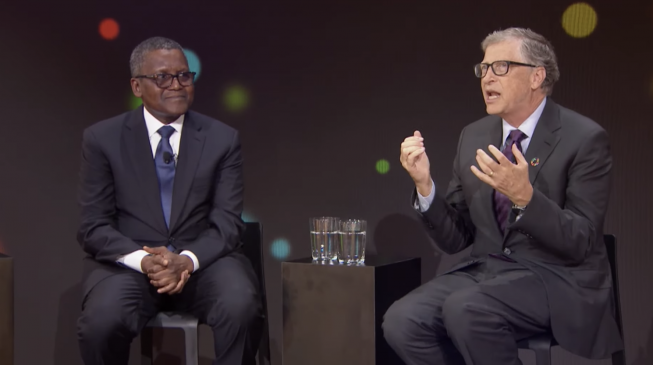 Bill Gates, American billionaire and co-chair of the Bill and Melinda Gates Foundation, has revealed what is most surprising to him about Aliko Dangote, president of the Dangote Group.
At the Goalkeepers Summit in New York on Wednesday, Gates and Dangote were asked what they have found to be most surprising about each other.
ADVERTISEMENT
In his response, Gates said: “It was fun when we got to know each other, we would be travelling around Lagos with the traffic — gives you lots of time to talk. I would be showing Aliko some of my charts, hey Sokoto has a pretty low vaccination rate and Kano needs to do this.”
“And Aliko, he really knows people, he has relationships, he is willing to reach out to people, he would say ‘let’s call the governor’, we would talk to him about this, next thing you know we’ve got the governor of Sokoto on the phone, we’re talking about this.
“So this ability to reach out, to draw on the broad relationships that Aliko has developed — and you know I am pretty shy about calling people. I just want to mail them my charts.
“In fact, what has come out of that is that Aliko and I do conference calls with six of the governors in the northern states where twice a year we look at vaccine coverage.
“It is a big challenge, but really drawing on Aliko’s communication skills and the fact that he is not afraid to call anyone. Everyone likes to talk to him, its been phenomenal.”

In his response, Dangote said before he met Bill Gates, he always thought was a “very, very tough guy” until he had an encounter with him.
“When I started my foundation in 1994, I never realised we had this massive challenge in the health sector,” Dangote said.
“Really, it was mind-boggling when we had this agreement to collaborate with the Bill and Melinda Gates Foundation and that really opened my eyes to realise that there are a lot of challenges in health.
“Honestly one of the things that made me very shocked and surprised is that at that time I hadn’t had the opportunity of meeting Bill but meeting Bill changed me into a different person.
“This is somebody that has nothing to do with us in Africa or Nigeria but he is putting his money and his soul, everything. He is very committed to helping humanity and that really surprising.
“It surprises me a lot and I realised that he is a simple person and I never knew Bill would be this simple. He is a very soft-spoken guy and kind-hearted. It is very difficult to find people like Bill in this world.
ADVERTISEMENT
“Bill, we are very grateful and I can assure you that with my association with Bill, my only prayer is that in the next few years, I will try and give my chunk of wealth to charity.”